Rev. Richard V. Warner, C.S.C., the Superior General of Holy Cross, first announced the creation of the Holy Cross Forum in April 2011. His vision was to bring together from across the Congregation young religious who were finally professed 10 years or less. 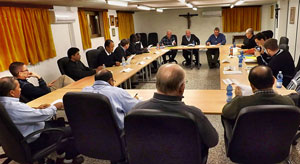 Those meetings coincided with meetings of the General Council in Rome, giving the chance for the two groups to get to know each other and interact. With the Congregation in the midst of a planning process involving structures and finances, this opportunity for the General Council to speak with younger members of the Congregation about their vision of the future was invaluable.

Meet the Superior General and his Council

The Forum’s second objective was to increase communication with and among the younger members of the Congregation. The third objective was to give young religious a chance to get to know each other across sectors and to share their experiences in Holy Cross with each other, thereby enhancing their Congregational awareness and perspective. One participant said afterward, “It was a powerful experience of our internationality.”

The second Holy Cross Forum, growing off the experience of the first one, also will meet three times, although the meetings have been extended to three full days. Sixteen brothers and priests will participate in this second Forum, but two were unable to attend the first session. They will gather twice more in Rome in 2014.

Tentative plans are in place for a third Forum to take place in 2015 and 2016, leading into the 2016 General Chapter.