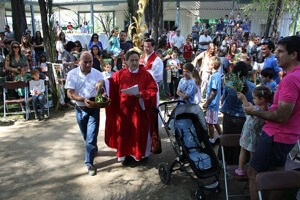 There is a growing demand in Chile for children and youths to have greater access to a high quality education. In 2012, thousands of students marched in streets throughout the country demanding a better education for all.

During one demonstration, a student from Saint George’s College, a Holy Cross educational institution, was interviewed for the national news on Television. He was asked why he was participating in such demonstrations when he was studying at one of the best schools in the country. The student responded, “Because that is the education that I would like one day for every child in my country.”

Since 1943 Holy Cross has been educating Chile’s young people, as well as empowering lay leadership in the Church and in the country. Our motto – “the cross our only hope” – has been very real as we work to bring hope to the people and walk with them through their struggles. That has often meant sharing quite personally in the joys and sorrows of this nation as we have sought to remain faithful in preaching the gospel of Christ. 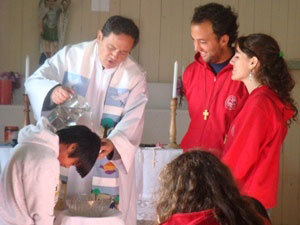 Even though we are few in number, Holy Cross is well-known in Chile, in part because of our educational institutions, but particularly because of our commitment to justice and social awareness. Since our foundation here we have worked with the poor and marginalized in the shantytowns of Santiago, as well as in the rural areas in the countryside. But we have also been part of the education of the economic and social elite of the country. Our mission in parishes, schools, and orphanages has built bridges, today more important than ever, in a country with growing wealth, but also with increasing inequalities and social divisions.

Holy Cross has helped young and old, families and communities find a Christian family within the Church that recognizes God’s gifts to every person, and empowers all to live lives that go beyond personal satisfaction.

Fr. José Ahumada, C.S.C., is a member of the District of Chile (Santiago, Chile).