The first mission of the Congregation of Holy Cross outside of France was in Algeria in Africa (1840). That mission was closed in 1873, yet in 1957 the Congregation returned to the continent when three brothers from the United States arrived in December to Ghana to assume the administration of St. John’s Secondary School in Sekondi.

Then in 1962, four brothers were sent to Liberia to administer St. Patrick’s High School in Monrovia. The Congregation served in Liberia until 1996. 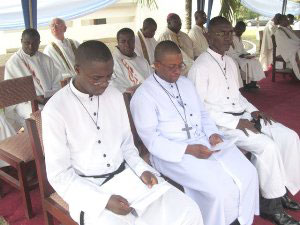 Also in 1962, just five years after arriving in Ghana, the Congregation opened a formation program connected with St. John’s School to train young Africans to become Holy Cross brothers. The first postulants to the Congregation were accepted at that time. Nine years later, in 1971, Br. Joseph Tsiquaye, C.S.C., became the first Ghanaian to profess Final Vows in the Congregation.

Today there are 34 finally professed Ghanaians in Holy Cross, and several of them have already risen to leadership positions in the Congregation.

The mainstay of our ministries has been the witness and commitment of religious men faithfully living our charism to serve not as individuals, but as a brotherhood. We hope to continue "to be a sign in an alienated world: men who have, for love of their Lord, become closest neighbors, trustworthy friends, brothers." – Br. Joseph Tsiquaye, C.S.C.   Read more ... 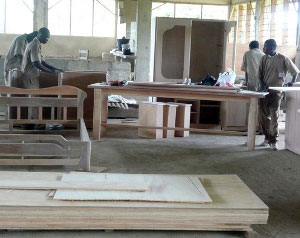 In 1965, the Archbishop of Cape Coast invited the Congregation to work at St. Augustine’s College, the oldest Catholic secondary school in the country. This began a flurry of expansion in the Congregation’s educational work in Ghana. Holy Cross also sent brothers to St. Augustine’s Training College in Bogoso (1969) and St. Theresa’s Minor Seminary in Amisano (1970). Then in 1982, the Congregation opened Holy Cross Skills Training Center in Anaji-Takoradi to train young men in trade skills such as carpentry, masonry, and auto mechanics.

Although Holy Cross engages in other pastoral ministry in Ghana, education continues as the focus of the Congregation’s principal service to the local Church. In this vein, the Congregation inaugurated the Holy Cross Continuing Formation Center 1992. Housed at the Congregation’s Ghanaian headquarters in Brafoyaw, the center provides programs, retreats, and trainings on leadership and spirituality for lay leaders in the Church.

The work of the Congregation of Holy Cross in Ghana is conducted by the District of West Africa (Cape Coast, Ghana).

For a listing of the Congregation's schools, parishes, and other apostolic works in Ghana, check out the ministries page.