All Roads Leading to Rome 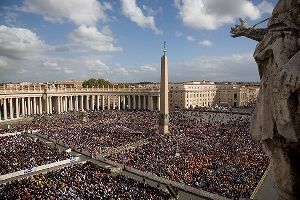 By the time the sun began to burn its way through the morning haze, I was standing outside the Generalate on the Via Framura ready to begin another day at the heart of the Congregation of Holy Cross. They say that all roads lead to Rome and that is equally true of Holy Cross. It is probably how Blessed Basile Moreau, who had a deep loyalty to the Holy Father and the Universal Church, dreamed it would become when he responded to the call of Pius IX in 1850 and sent religious to Santa Prisca to care for the abandoned children there.

For 18 years, those Holy Cross pioneers cared for the orphans at Santa Prisca and at the agricultural school at Vigna Pia. Yet even after they left Italy in 1868, the presence of Holy Cross perdured through the work of Rev. Victor Drouelle, C.S.C., who received ecclesiastics and priests from France who came to Rome for studies. That tradition of community members studying in the Eternal City continues today.

In 1950, the General Chapter decided to move the Generalate to Rome, and that move was executed in 1954 under the leadership of Rev. Christopher O'Toole, C.S.C., the Superior General at the time. Since then, the Generalate moved to its current location. In addition to the offices of the General Administration, there are guest rooms where we welcome the many Holy Cross religious who are always coming and going, carrying the work of Holy Cross to the far corners of the world.

I always marvel at the energy and hope that pulses from this small part of our worldwide presence. Today, my pause is brief. There is much to be done; God’s daily work is our own. And I must begin.