In 1952, Servant of God, Fr. Patrick Peyton, C.S.C., arrived in the Philippines to launch the Family Rosary Crusade in the country. An instant connection formed between the “Rosary Priest” and the Pilipino people who refer to themselves as el Pueblo Amante de María (the People Beloved of Mary). 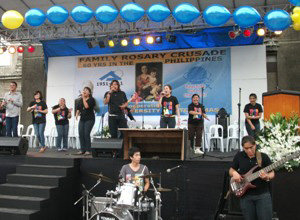 Especially in the later years of his life, Fr. Peyton would spend several months each year in the Philippines conducting diocesan missions and deepening the people’s devotion to Mary. By the time of Fr. Peyton’s death in 1992, the Congregation’s Family Rosary Crusade was firmly established in the country, producing its own Television and radio programming and supporting prayer and service groups in many parishes in the country.

Discover the life of Servant of God Patrick Peyton

The great resilience and hope of the Filipino people finds its source in their deep love for Our Lady "who knew grief and was a Lady of Sorrows." Not surprisingly then, the Filipinos quickly came to love the ‘Rosary priest,’ Father Patrick Peyton, who held Rosary rallies for families that were attended by millions. – Rev. John Phalen, C.S.C.   Read more ... 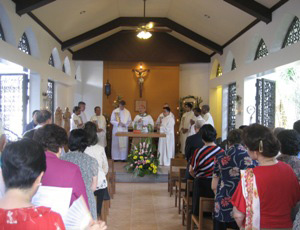 The work of the Congregation of Holy Cross in the Philippines is conducted by South India Province (Bangalore, India).