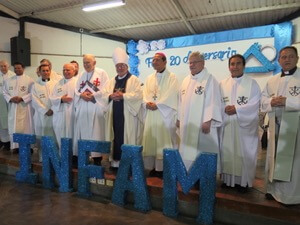 The second week of May was a week of celebration for the Congregation of Holy Cross in Peru. On May 9-10, the Holy Cross District of Peru celebrated the 20th Anniversary of the Pastoral Institute on the Family (Instituto de Pastoral de la Familia). Just two days later, on May 12, the community gathered again to celebrate the inauguration of the Fr. David Elbert Farrell Tormey, C.S.C., Sports and Cultural Pavilion at Fe y Alegría School 25.

The celebrations drew together not just the Holy Cross Family in Peru, but also many Holy Cross religious, collaborators, and benefactors from beyond the country.

Among them was Fr. David Farrell, C.S.C., the namesake of the new pavilion and the founder of INFAM who now resides at Holy Cross House in the United States after many years of service in Peru.

Also present, representing the United States Province of Priests and Brothers, was Fr. Richard Wilkinson, C.S.C., the Vicar and First Assistant of the Province, which has responsibility for the Congregation's mission in Peru. 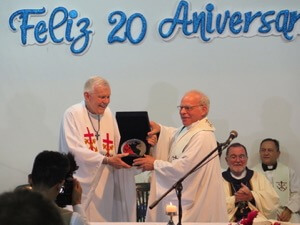 The week’s celebrations began with the activities surrounding the 20th anniversary of the founding of the Pastoral Institute on the Family (INFAM). INFAM is a part of Holy Cross Family Ministries, which was founded by the Venerable Patrick Peyton, C.S.C., to inspire, promote, and foster the prayer life and spiritual well-being of families throughout the world. 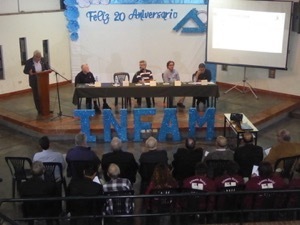 In recounting the founding of INFAM at the anniversary celebration, Fr. Farrell said that the particular mission of the institute is “not to entertain people, but to be able to make a social analysis and a qualitative evaluation to know if with our programs we are really helping to solve the problems of the family in Peru and in this sector of San Juan de Lurigancho.”

In keeping with that mission, the anniversary celebrations centered around a panel of reflections that examined the difficulties facing families in that region of Peru. The panel was coordinated by Fr. Aníbal Niño, C.S.C., the current Director of INFAM.

The Most Rev. Arthur J. Colgan, C.S.C., Auxiliary Bishop of the Diocese of Chosica, also delivered a presentation examining the pastoral challenges presented and raised by Pope Francis’s Apostolic Exhortation on the Family, Amoris Laetitia. 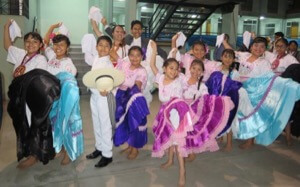 In addition to these reflections and presentations, there were also artistic and cultural presentations led by programs supported and run by INFAM. The celebrations concluded with a moving Mass, presided over by Bishop Colgan. The Most Rev. Jorge Izaguirre, C.S.C., Bishop Prelate of the Territorial Prelature of Chuquibamba, was also in attendance.

Still reveling in the joy of the anniversary celebrations, the Holy Cross community gathered again just two days later on May 12 to inaugurate the new Fr. Farrell Sports and Cultural Pavilion at the Congregation’s Fe y Alegría School in Huáscar, Canto Grande. The pavilion had long been a dream of the school and Holy Cross community. 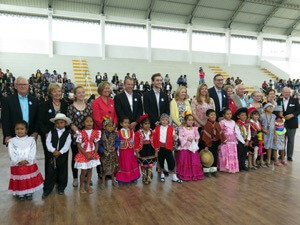 As Fr. John Phalen, C.S.C., Superior of the District of Peru, remarked during the celebrations, the hope is that this new facility will serve not only the school community, but also be a resource for the neighborhood as a center that leads to the “promotion of a healthy lifestyle.” It is the largest outdoor sports and cultural pavilion of its type in this sector of Lima.

Fittingly, the joyous celebration was truly a community affair, with not only students and faculty from Fe y Alegría 25 School participating, but also others of the surrounding neighborhood, including children and staff from Yancana Huasy, the Congregation's outreach to children who live with physical and mental challenges, such as Downs' Syndrome, and their families. There was a real spirit of inclusion and community that permeated the festivities. 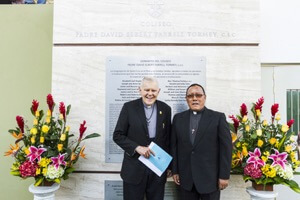 Speaking at the dedication, Fr. Jorge Mallea, C.S.C., Director of the School, thanked all of those people, including many benefactors from the United States, who had made the dream of this pavilion a reality. He mentioned that the new facility is source of pride for the students of the school, and now “the challenge is to take care of it and use it well.”