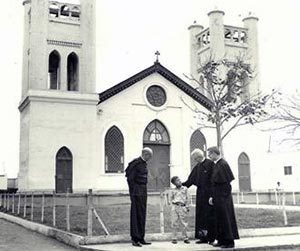 The Congregation of Holy Cross first arrived in Peru in September 1963. Several priests from the United States came to assume the pastoral care of field hands and factory workers in a sugar hacienda on the coast named Cartavio.

In 1974, the Congregation turned the work in Cartavio over to a diocesan team and assumed leadership of three parishes in Chimbote. Chimbote was a growing industrial town in which many of the workers and their families lived in squatters’ villages on the city’s outskirts. As it had done previously in Cartavio, the Congregation lived among the poor whom they were accompanying and serving.

From Chimbote, in 1977, the Congregation expanded its work to include parishes in Canto Grande, which is a poor sector of the capital of Lima, and in Puno, which is among the indigenous aymaran community.

Check out videos of the worldwide ministries of Holy Cross 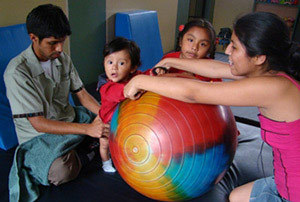 In 1981, within the boundaries of Lord of Hope Parish in Canto Grande, the Congregation established “Yancana Huasy” (literally “House of Work” in the language of the Incas). Yancana Huasy attends to the needs of children who live with physical and mental challenges, including Downs’ Syndrome, and their families.

Since 2003, Lord of Hope Parish in Canto Grande has served as the hub of Holy Cross in Peru. The parish, which is divided into 19 churches and chapels, serves more than 200,000 people. 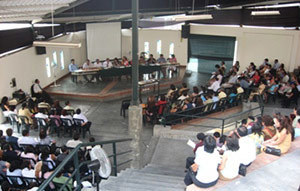 To better serve the complex and diverse needs facing the urban poor who they serve in the parish, the Congregation established the Peyton Center with the generous support of Holy Cross Family Ministries. The Peyton Center is as a multi-purpose cultural center, hosting meetings, groups, workshops, and special celebrations.

The Center also has begun a service-oriented, investigative team that looks critically at family life among the urban poor.

Through the evangelization of the family, in schools and adult education, in healthcare, in programs for the elderly, and in holistic attention to those with special needs, Holy Cross is responding as educators in the faith to those immersed in the challenges and the sufferings of the new cultures of urban poverties. – Rev. David Farrell, C.S.C., and Rev. Anibal Nino, C.S.C.   Read more ...

After a long history of collaboration, the Congregation's mission in Peru joined with the mission in Chile to form one unified jurisdiction. The work of the Congregation of Holy Cross in Chile is now overseen by the unified District of Chile-Peru (Lima Peru, and Santiago, Chile).

For a listing of the Congregation's schools, parishes, and other apostolic works in Peru, check out the ministries page.