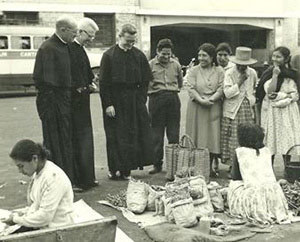 In 1963, Holy Cross answered the call of Pope John XXIII to send missionaries to the Church in Latin America. I had prior experience in politics and civil rights in the United States, so I saw, with inner pride, how my older brothers in Holy Cross won the affection of the most needy members of Peru’s population and the respect and gratitude of the trade union leaders in that first mission on the northern coast of Peru.

Then, Holy Cross initiated a parish in the neighboring diocese of Chimbote, populated by those fleeing from rural poverty and later from the scourge of terrorism and human rights abuses.

In those barrios – ours was named “Esperanza” or “Hope” – we learned to live without electricity, water, sewage or paved streets, as we became neighbors among those especially chosen by the Lord. That parish in Chimbote became a launching pad for Holy Cross priests who went on to serve in the new barrios in Lima and the southern Andes.

Today that original hope is anchored in the largest parish in Peru, El Señor de la Esperanza (population 250,000), on the Eastern outskirts of Lima. Blessed with competent and committed Peruvian priests and accompanied by well-trained and dedicated lay leaders, Holy Cross continues to bring hope to those most in need in the Church, the state and civil society. 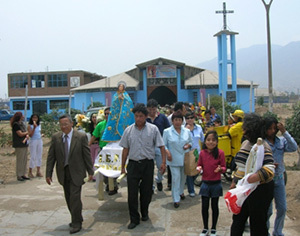 We draw on theological, pastoral, and social analyses and planning in guiding and fulfilling this complex mission. Through the evangelization of the family, in schools and adult education, in healthcare, in programs for the elderly, and in holistic attention to those with special needs, Holy Cross is responding as educators in the faith to those immersed in the challenges and the sufferings of the new cultures of urban poverties.