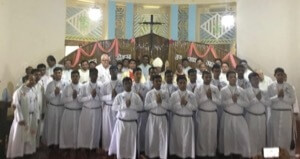 July 26, 2019, was a day of abundant blessings for the Congregation of Holy Cross in Bangladesh as 17 novices professed their First Vows at the Holy Cross Pastoral and Retreat Center on the same campus of the Novitiate in Barisal. Reflecting the Congregation’s charism as being "composed of two distinct societies of religious, one of religious priests and one of religious brothers, bound together in one indivisible brotherhood,” the First Profession class included five brothers and 12 seminarians. 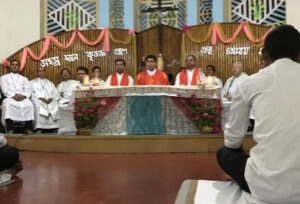 The evening before the Professions, Fr. Ashim Theotonius Gonsalves, C.S.C., Novice Master, presided with several concelebrants at a Mass of Thanksgiving for the novices, their families, and other Holy Cross religious present for the profession ceremony. 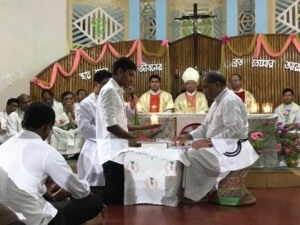 The following morning, the Most Rev. Lawrence Subrata Howlader, C.S.C., Bishop of the Diocese of Barisal, celebrated and preached at the Mass of First Profession. The vows of the novices were received by their respective provincial superiors: in the case of the brother novices, Br. Subal Lawrence Rozario, C.S.C., and in the case of the seminarian novices, Fr. James Clement Cruze, C.S.C.

A large number of Holy Cross priests, brothers, and sisters, along with many religious from other congregations, were there to pray for the novices and offer their support to them.

A short cultural program of speeches, music, and dance followed the Mass. The festive spirit then continued over a delicious meal which was enjoyed by all.

Three days later, on July 29, the Holy Cross Novitiate in Barisal was the site of another joyful celebration as 16 new novices were officially received into the Novitiate. Of the new novices, 10 are from the Sacred Heart Province, and six from the St. Joseph Province. 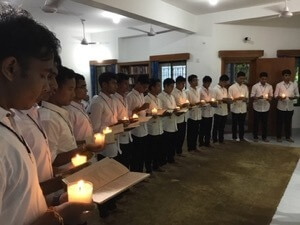 This new class of novices will again be accompanied and formed by Fr. Gonsalves as their Novice Master. Fr. Gonsalves will be joined on staff by a new Assistant this year, Br. Shimul Andres Rozario, C.S.C. Br. Shimul has been serving as the Vocation Director for the St. Joseph Province. He is replacing Br. Sattya Richard Purification, C.S.C., who completes four years as Assistant Novice Master. Br. Sattya will soon begin graduate studies in Nairobi, Kenya.

The large incoming class of novices is a tangible sign of the continued strength of the Holy Cross brothers and priests in Bangladesh.

Holy Cross first arrived to Bangladesh in 1853 at the request of Propaganda Fide, the Vatican congregation that oversees the Church’s missionary work. For over the first century of the mission, the Congregation directed vocations to the local dioceses. With the local Church firmly established in the 1970s, the Congregation began accepting vocations in earnest. Today, Holy Cross continues to grow steadily through the Final Professions and Ordinations of many Bangladeshi brothers and priests.