In 1851, Propaganda Fide, the Vatican congregation that oversees the Church’s missionary work, asked Blessed Basile Moreau if Holy Cross would assume responsibility for the Church’s mission in East Bengal. Whereas other congregations had refused because of the region’s poverty and difficult climate, Moreau accepted. After the first group to set sail was forced to turn back in December 1852 due to a storm, a second group of priests, brothers, and sisters arrived to Calcutta on May 20, 1853. They made their way to Dhaka and Noakhali by June.

From the beginning, the work of Holy Cross in East Bengal was marked by crosses, including many deaths due to disease and natural disasters. The Congregation persevered, sending successive generations of missionaries from France and North America. This perseverance bore fruit in the establishment of the local Church and the evangelization of the tribal peoples.

The Congregation also persevered in solidarity with the people during the conflicts that arose between India and Pakistan following the partition of British India in 1947. When the Bangladesh Liberation War broke out in 1971, leading to the creation of Bangladesh as a sovereign nation, Holy Cross helped minister to the millions displaced by the fighting.

Even as heavy crosses accompanied the mission of Holy Cross in this land from our earliest days, they have also been the source of our greatest hope. And so, we seek to carry on with the same spirit, allowing the love of Christ to urge us onward in performing works of charity and justice no matter the difficulties. – Rev. Dick Timm, C.S.C.   Read more ...

For over the first century of the mission, the Congregation directed vocations to the local dioceses. Several who did join the Congregation were chosen to become bishops, including Servant of God, Bishop Theotonius Ganguly. With the local Church firmly established in the 1970s, the Congregation began accepting vocations in earnest. Today, Holy Cross continues to grow through the Final Professions and Ordinations of many Bangladeshi brothers and priests.

Although Christians constitute a small minority (about 0.3%) in this predominantly Muslim country, the Congregation is well-known and respected.

Notre Dame College in Dhaka, founded in 1949, is the premier college and institution of higher secondary education in the country. The excellence of the college's education moved the government and Church in Bangladesh to petition Holy Cross to found a university in the country, and Notre Dame University held its first classes on December 7, 2014. The Congregation also administers over a dozen high schools and trade schools.

While educating some of the elite, the Congregation has a long history of advocating on behalf of the dignity and rights of the poor. In many ways, the work of Servant of God, Br. Flavian Laplante, C.S.C., epitomizes the Congregation’s outreach. He organized the fishermen in the coastal area near Chittagong into cooperatives and built an orphanage and schools for them.

Learn about the life of Servant of God Flavian Laplante

It is this heroic witness of the Holy Cross brothers that led me and many others to answer the call of Our Lord to fall in step with them. We today seek to build on their great legacy of zeal by expanding our educational programs into the tribal regions, which are poorer and more marginalized. – Br. John Rozario, C.S.C.   Read more ... 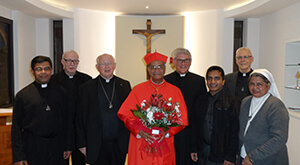 November 20, 2016, saw a beautiful recognition of the Congregation's legacy in Bangladesh as one of its own, Patrick D'Rosario, C.S.C., Archbishop of Dhaka, was created a Cardinal by Pope Francis. Cardinal D'Rosario is the first Cardinal ever from Bangladesh, and only the second Cardinal from the Congregation.

For a listing of the Congregation's schools, parishes, and other apostolic works in Bangladesh, check out the ministries page.