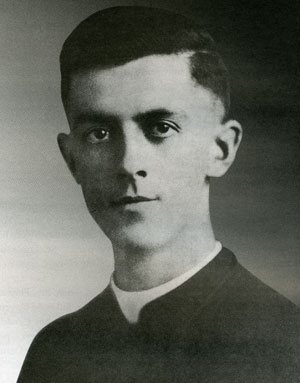 Br. Flavian Laplante, C.S.C., was born on July 27, 1907, in St.-Louis-de-Richelieu, Quebec, Canada. He was the seventh child of nine to Honoré Laplante and Louise Théroux, who named him Doria.

After meeting the Holy Cross brothers at school, he entered the Congregation at the age of 16. On August 15, 1923, he received the religious habit and took the name Flavian. Just over five years later, after completing his Novitiate and studying at St. Joseph’s Scholasticate, he professed Final Vows on August 16, 1928.

Saint André Bessette, C.S.C., then 87 years old, was present at his departure from the college and remarked to Flavian, “How fortunate you are in becoming a missionary. I envy you.”

Flavian arrived to Chittagong in East Bengal on December 1, 1932. His first assignment was to assist at the Congregation’s new high school in Padrishibpur. Besides assisting with construction and other manual labor, Flavian also taught and supervised a dormitory before he became principal two years later. This was the first in a series of teaching and administrative assignments at the Congregation’s schools in East Bengal.

Explore the history and current work of Holy Cross in Bangladesh

In May 1942, when the Japanese Army started air raids on Chittagong, Flavian went there to assist. He remained in Chittagong in 1943 and 1944 when a severe famine hit the land so he could help tend to the hungry and sick. Flavian worked principally with the Hindus, who were considered at the bottom of society. It was during this time that he met the fishermen to whom he eventually devoted most of his life.

Following the end of World War II, Flavian worked out a program so that many fishermen could receive new boats, because theirs had been commandeered during the war. Flavian often accompanied the fishermen out to sea for days. He even led them in resistance against pirates and participated in rescue missions. Flavian’s main plan, however, was to organize the fisherman into cooperatives in which they could help each other.

At the same time, Flavian began constructing an orphanage at Diang, about 10 miles from Chittagong, after the War to care for the orphans from the Chakati Refugee Camp. Flavian persisted in the project, including the construction of a school, despite thefts and vandalism from the unsupportive neighbors.

With the exception of an assignment to Noakhali from 1957 to 1962, Flavian dedicated the rest of his life to ministering in Diang and among the fishermen of the nearby region. He renamed the settlement there Miriam Ashram or the “Marian Hermitage,” borrowing from the Hindu tradition of places of religious retreat.

Many development and educational projects were started in these years, including the Women’s Promotion Center founded with the help of the Holy Cross sisters. In 1975, Flavian also set up the “Kalidaha Fishing Project” to help fisherman motorize their boats and founded a technical school to give them the skills to build and repair their own boats.

On December 24, 1976, after returning from his fifth and final home visit to Canada, Flavian retired to the life of a hermit. He lived in his personal ashram (or hermitage) 1,500 feet from the brothers’ residence in Diang.

On October 1, 1978, he had a statue of Our Lady installed on the property, and the following year, on February 11, he organized a day of prayer and feast in honor of Mary. Over 800 pilgrims came that day, and this celebration continues as a major pilgrimage in Bangladesh to this day.

In 1981, when his health became a serious concern, Flavian wouldn’t go to Canada for treatment on the advice of his superiors. Instead, he completed 49 years of service to the poor in Bangladesh, dying there on June 19, 1981.

Flavian was declared a Servant of God on February 13, 2009 – the Feast of Our Lady of Lourdes – by Most Rev. Patrick D’Rozario, Bishop of Chittagong Diocese, Bangladesh. His cause is being advanced by coordinated work in Bangladesh and in Canada.

See a timeline of major events in Br. Flavian's life