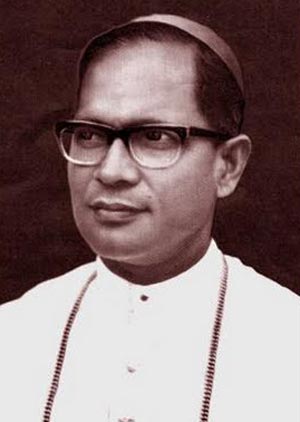 Archbishop Theotonius Amal Ganguly was born in Hashnabad, which is in present-day Bangladesh, on Feb. 18, 1920, the feast day of his patron saint, St. Theotonius. His family added the Bengali name Amal, which means “spotless” or “innocent.”

After being educated by the Brothers of Holy Cross at Holy Cross High School in Bandura, Theotonius attended St. Albert’s Seminary in Ranchi, Bihard, India. He was ordained a diocesan priest in the Dhaka Archdiocese on June 6, 1946.

In 1947, Ganguly went to the University of Notre Dame in Notre Dame, Indiana, in the United States to earn a master’s degree and doctorate. He graduated with his Doctorate in Philosophy in 1951, making him the first Bengali Christian to receive a doctorate. It was the first of several firsts Ganguly's life would mark for the Catholic community in Bangladesh.

While at Notre Dame, he came to know Holy Cross more closely and decided to enter the Congregation. He attended the Novitiate in Jordan, Minnesota, and professed First Vows on August 16, 1952.

Upon returning to homeland, Ganguly began teaching at Notre Dame College, a well-respected college run by the Congregation in Dhaka. He was made the school’s Dean of Studies in 1954 and Assistant Principal in 1958. In between, Ganguly made his Final Vows in 1955.

See a timeline of major events in Archbishop Ganguly's life

Upon the death of Rev. James I. Martin, C.S.C., on March 21, 1960, Ganguly was appointed Principal at Notre Dame College. He was the first Bengali appointed to that position. That appointment, however, did not last long as on September 3 of the same year, Pope John XXIII nominated Fr. Ganguly as Auxiliary Bishop to Archbishop Lawrence L. Graner in the Archdiocese of Dhaka. Ganguly was ordained a bishop on October 7, 1960, becoming the first Bengali bishop in history. He immediately began work as Archbishop Graner’s auxiliary. 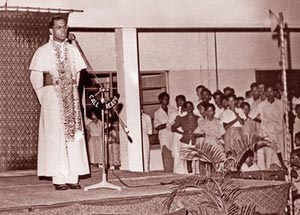 Ganguly’s work as Auxiliary Bishop included serving as Pastor of a parish and working as Archdiocesan Treasurer. On July 6, 1965, he was appointed Graner’s co-adjutor, and when the archbishop retired November 23, 1967, Ganguly became the Archbishop of the Archdiocese of Dhaka.

In his leadership at both Notre Dame College and in the Archdiocese, Ganguly was known for the way he respected the dignity of every person. He had  a truly religious spirit and a gentlemanly character. His gentle, yet strong persona helped him shepherd the Archdiocese through the trying time of the Bangladesh Liberation War in 1971.

Archbishop Ganguly’s Cause for Sainthood was opened by the Archdiocese of Dhaka in September 2006, thereby declaring Ganguly a Servant of God. The diocesan phase of the cause was closed on April 19, 2018. The documents have been submitted to the Congregation for the Causes of the Saints in Rome, for the writing of the required positio on the life and virtue of Archbishop Ganguly.

While on his apostolic visit to Bangladesh in November and December 2017, Pope Francis blessed the grave of Archbishop Ganguly at the St. Mary's Cathedral compound in Dhaka. The Holy Father also prayed for Servant of God, Br. Flavian LaPlante, C.S.C., who dedicated his life to missionary work in Bangladesh.

Explore the history and current work of Holy Cross in Bangladesh