The Generalate of the Congregation of Holy Cross was recently notified by the office of Dr. Andrea Ambrosi, the Congregation’s Postulator, that the Congregation for the Causes of Saints has issued a “Decree of Judicial Validity” for the cause of Servant of God, Archbishop Theotonius Ganguly. This Decree is an approval of the work submitted last spring by the Tribunal in the Archdiocese of Dhaka and brings to an official close the diocesan phase of the cause.

Holy Cross can now proceed to request the naming of a realtor for the writing of the required positio on the life and virtue of Archbishop Ganguly.

Learn more about the heoric life of Servant of God, Archbishop Ganguly 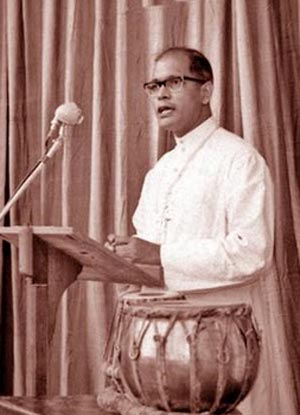 “On behalf of the Congregation of Holy Cross, we extend our gratitude to Cardinal Patrick D’Rozario for competently overseeing this initial phase and to the members of his Tribunal for their diligence and commitment to this project,” said Br. Paul Bednarczyk, C.S.C., Vicar General and First General Assistant who also serves as the Congregation’s Vice-Postulator.

In his leadership, Ganguly was known for the way he respected the dignity of every person. He had a truly religious spirit and a gentlemanly character. His gentle, yet strong persona helped him shepherd the Archdiocese through the trying time of the Bangladesh Liberation War in 1971. A heart attack caused his sudden death on Sept. 2, 1977.

Almost at the same time, the Holy Cross Generalate received news that another of Congregation’s canonization causes was also advancing. The Most Rev. Moses Costa, C.S.C., Archbishop of the Archdiocese of Chittagong, issued a Decree appointing the membership of the Historical Commission for the cause of Servant of God, Brother Flavian Laplante.

Since the majority of Br. Flavian’s personal papers are stored in Montreal, the commission members live in the Montreal area. All four have former experience of working with causes of canonization. The task of the Historical Commission is to write the official biography on the Servant of God, which is required in the diocesan phase of the cause.

Br. Bednarczyk expressed confidence that the Theological Commission for Fr. Flavian will soon be appointed. 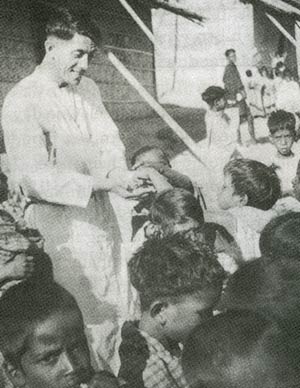 Born on July 27, 1907, in St.-Louis-de-Richelieu, Quebec, Canada, Br. Flavian entered Holy Cross when he was only 16 years old. He professed Final Vows on August 16, 1928. After working several years in Notre Dame College in Quebec as a teacher and dorm supervisor, Flavian was assigned to the Congregation’s mission in East Bengal in 1932 (present-day Bangladesh and India).

After serving refugees in Chittagong during World War II, Br. Flavian began to work among the poor in the Diang region, showing a special concern and care for the fishermen and orphans. He spearheaded many development and educational projects during those years, including the Women’s Promotion Center founded with the help of the Holy Cross sisters. On December 24, 1976, after returning from his fifth and final home visit to Canada, Flavian retired to the life of a hermit. He lived in his personal ashram (or hermitage) 1,500 feet from the brothers’ residence in Diang until his death in 1981.

Learn about our heroes in Holy Cross

The Congregation of Holy Cross currently has one canonized saint, St. André Bessette. The Congregation’s founder, Blessed Basile Moreau, was beatified on September 15, 2007. Next along in the process of canonization is Fr. Patrick Peyton, C.S.C., known affectionately as the “Rosary Priest”, who was declared Venerable (the last stage before beatification) on December 18, 2017.

In addition to Archbishop Ganguly and Br. Flavian, one other Holy Cross religious has been declared a Servant of God: Bishop Vincent McCauley, C.S.C., who after working in the Holy Cross missions in Bangladesh and Uganda served with distinction as first bishop of Fort Portal, Uganda.

“We encourage people to pray and to develop a devotion to all of our saintly men in the Congregation of Holy Cross,” said Br. Bednarczyk. “In particular, please pray for the canonization of our beloved founder. At this time, we are still awaiting a miracle for Blessed Moreau’s cause to proceed further in the canonization process.”