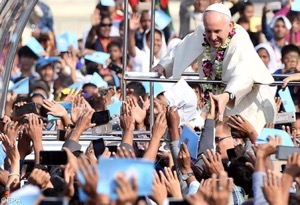 They were three glorious days for the Church and people of Bangladesh when Pope Francis made his apostolic journey to the country from November 30 to December 2, 2017.

"Although the Church in Bangladesh is a very small minority, only about 350,000 or so Catholics as opposed to 160 million people in the country, the Pope's visit signified its importance and that it is remembered by the Universal Church,” said Br. Harold Bijoy Rodrigues, C.S.C., Superior of the St. Joseph Province of Holy Cross, which has its headquarters in Dhaka.

Since the arrival of the first Holy Cross religious in Bengal in 1853, the Congregation of Holy Cross has been so integrally connected with the history of the Church in Bangladesh that it was no surprise it was prominently featured throughout the Holy Father’s visit. 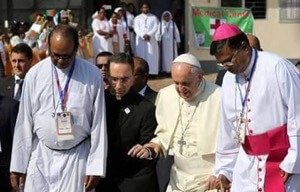 “Holy Cross men and women, including a cardinal, an archbishop, several bishops, and many religious, were very much involved in making this visit a successful and glorious one. We take much pride in our participation in this visit, particularly his visit with the youth at Notre Dame College and University, both being administered by the Congregation of Holy Cross,” added Br. Rodrigues.

Upon landing at the Dhaka Airport, Pope Francis was greeted by political leaders and by Patrick Cardinal D’Rozario, C.S.C., Archbishop of the Archdiocese of Dhaka, as well as by the other bishops of the country, four of whom are members of Holy Cross. 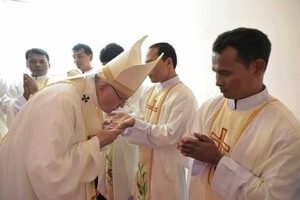 The five new priests, all members of the Sacred Heart of Jesus Province, agree that it was a privilege and special blessing for them to be ordained by Pope Francis, especially during this historical milestone for the Bangladeshi Church.

The Mass was held at Suhrawardy Udyan Park. Given the theme of the papal visit, “Peace and Harmony,” this location was symbolic as it was there that the War of Liberation ended with the Pakistani army surrendering all of its modern arms along with 92,000 soldiers, thus establishing the People’s Republic of Bangladesh.

Later that afternoon the Holy Father entered St. Mary’s Cathedral compound in a rickshaw to meet with interfaith leaders at the Archbishop’s residence, after which he blessed the grave of Servant of God, Archbishop Theotonius Ganguly, C.S.C., and prayed for Servant of God, Br. Flavian LaPlante, C.S.C. The Pope also met with the Church’s hierarchy at the home for elderly priests on the Cathedral campus.

Learn about Holy Cross religious on the path to canonization

The following morning on December 2, Pope Francis met with the priests, consecrated men and women religious, seminarians, and novices at Holy Cross Church, adjacent to Notre Dame College founded by the Sisters of Holy Cross. Pope Francis was welcomed by the Most Rev. Benjamin Costa, C.S.C., Archbishop of the Archdiocese of Chittagong and president of the bishops' commission for clergy and religious life. 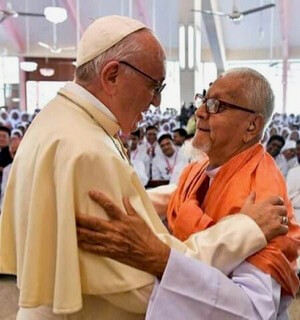 It was a touching moment at this gathering when Br. Lawrence Dias, C.S.C., a member of the St. Joseph Province, gave public testimony to the Holy Father on his 63 years as a Holy Cross brother. Br. Lawrence is a hermit at Diang, Mariam Ashram in Chittagong, which was founded by Servant of God Flavian.

Br. Lawrence also urged Pope Francis to canonize Br. Flavian soon, to which the Holy Father responded that he would try.

“The inclusion of Brother Lawrence Dias to the panel of presenters at the audience with the clergy and religious has been the highest point for the Holy Cross Brothers in Bangladesh," remarked Br. Rodrigues.

After lunch the Holy Father arrived on the campus of Holy Cross College and Notre Dame University Bangladesh to the gleeful shouts of 10,000 young Catholics from around the country. As is customary during his apostolic visits, the Pope met with young people and heard their testimonies of faith as a sign of hope.

The Holy Cross Mission Center, based in Notre Dame, Indiana, in the United States helped provide funding for hundreds of the young adults that attended the gathering. 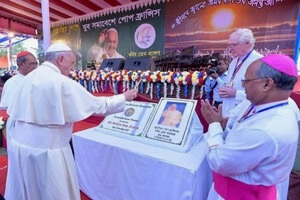 After his meeting with the youth, the Holy Father blessed the cornerstones for Holy Cross College and the recently established Notre Dame University Bangladesh.

"It was an awesome experience working with so many people, religious and lay, trying to do our best to make this visit a memorable one, especially in terms of spiritual enrichment of the entire people of God in Bangladesh,” said Br. Rodrigues. 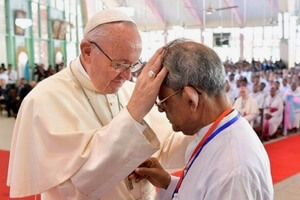 In reflecting back on these memorable three days, Cardinal D’Rozario expressed gratitude to God, the government of Bangladesh, and the Vatican for the success of the papal visit. The Cardinal told Vatican Radio that the Holy Father gave a “sense of identity” to Catholics who though a minority felt as though they are “somebody” in the nation, which was a “big encouragement” for them.