Love of Christ Urging Us Onward

For more than a century after the arrival of our first missionaries in 1853, the zeal and work of Holy Cross in Bengal was focused on building up and giving life to the local Church. Vocations to the Congregation were discouraged so that an indigenous diocesan clergy and hierarchy could be established. 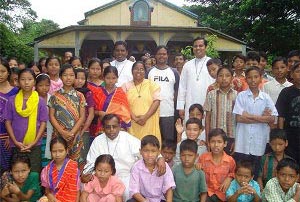 With that goal accomplished in 1970, Holy Cross shifted its efforts to build up the Congregation and its own work among the people of the soon-to-be independent nation of Bangladesh.

Today, the Sacred Heart of Jesus Province, established in 1998, has grown to nearly 100 temporarily and finally professed religious, the vast majority of whom are native Bangladeshi. Along with this growth in our community has come a growth in our mission. We run Notre Dame College in Dhaka and have plans to begin a university in Dhaka as well as another college in Mymensingh. We serve in over a dozen parishes, the majority of them among the tribal peoples, often in the more remote areas of the country. We also administer two pastoral and retreat centers. 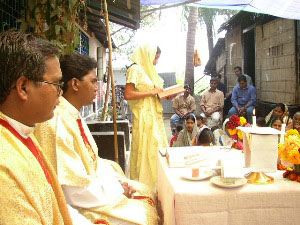 All this growth has not come without its fair share of crosses, including war, poverty, political oppression, and natural disasters. Yet, even as heavy crosses accompanied the mission of Holy Cross in this land from our earliest days here, they have also been, as Blessed Basile Moreau himself taught, the source of our greatest hope. And so we seek to carry on with the same spirit, allowing the love of Christ to urge us onward in performing works of charity and justice no matter the difficulties.

Fr. Dick Timm, C.S.C., is a member of the Sacred Heart of Jesus Province (Dhaka, Bangladesh).

Read the reflection of Br. John Rozario, C.S.C., on Holy Cross in Bangladesh