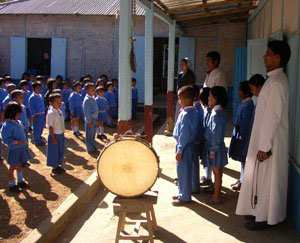 I first came to know the Holy Cross brothers in the early 1950s when they took over the school I was attending. Those years following the 1947 partition of Bengal were tumultuous.

Although the partition was made largely along religious lines, it still left Hindus in predominately Muslim East Bengal (which would later become Bangladesh) and Muslims in predominately Hindu West Bengal (which remains part of India today). The resulting dislocation of people led to a wave of riots and killings as both groups migrated to be united with their fellow believers.

At the time of partition, the brothers were in charge of several schools in the Dhaka and Chittagong dioceses. As our teachers and students migrated across the new border, it became hard to staff and manage the schools. Yet, Holy Cross persevered and continued to welcome students and faculty to our schools regardless of their religion. It also continued to reach out in a preferential way to the poor.

There was the work of Servant of God, Br. Flavian Laplante, C.S.C., who worked in the fishing villages in the coastal areas of Chittagong, organizing the people into cooperatives and establishing schools and an orphanage. Then there was the ministry of Br. Andrew Staffes, C.S.C., who founded St. Joseph School of Industrial Trades in Narinda, Dhaka, that advances the lives of many underprivileged students. 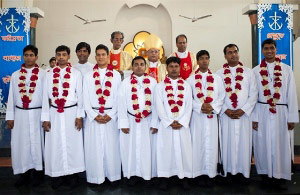 It is this heroic witness of the Holy Cross brothers that led me and many others to answer the call of Our Lord to fall in step with them as educators in the faith. We today seek to build on their great legacy of zeal by expanding our educational programs into the tribal regions, which are poorer and more marginalized.

“The mission is not simple,” as our Constitutions remind us, “for the impoverishments we would relieve are not simple” (2:14). The mission in Bangladesh has never been simple, and yet the grace provided by Our Lord has always been more than enough.

Read the reflection of Rev. Dick Timm, C.S.C., on Holy Cross in Bangladesh