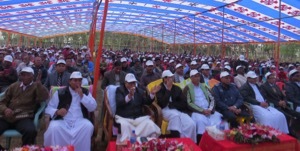 Back on January 20-21, the Congregation of Holy Cross in Bangladesh celebrated the 75th Anniversary of Biroidakuni High School in Mymensingh. The school was founded in 1941 by the Holy Cross Brothers, and its first Headmaster was Br. Andrew Joseph Staffes, C.S.C.

The Platinum Jubilee Celebration was a moment of great joy not only for the Congregation, but also the people of the region, as evidenced by the presence of Advocate Promode Mankin, MP, the State Minister of the Welfare. Mr. Mankin, a proud graduate and former headmaster himself of the high school (1969-1979), is the only Christian Member of the Parliament of Bangladesh. He was a huge contributor to and supporter of this celebration.

Learn the history of Holy Cross in Bangladesh

Over three thousand people, including present student, teachers, staff, guests, and Church dignitaries, attended the two-day program, which began with Mass on January 20. The Most Rev. Paul Ponen Kubi, C.S.C., Bishop of the Diocese of Mymensingh, presided and preached at the Mass. 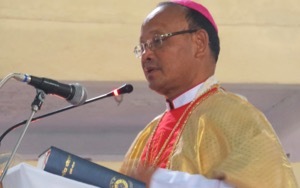 In his homily, Bishop Kubi said, “It’s time to thank and praise the Lord our God for his goodness and blessing upon the people of this area, especially the tribal people, through Holy Cross brothers who came all alone from abroad to educate our people. We are grateful to God and the Holy Cross brothers as well.”

After Mass, all the people gathered at the school football field fort he main program, which began with a welcoming dance by present and past students. Br. Proshanta Ignatius Costa, C.S.C., the current Headmaster of Biroidakuni High School, delivered the many welcoming speech, which was then followed by remarks by other invited guests. In the program, Mr. Mankin also unveiled the “Logo” of the Jubilee. Although it rained during the program, it did not dampen the enthusiasm of the guests, who then shared lunch later in the afternoon.

Read about Holy Cross' charism as Educators in the Faith 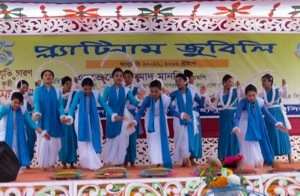 The second day of the program began with a joyous procession from the minister’s house to the school. Mr. Mankin led the rally, which was attended by over a thousand people. The ensuing program included remarks by many of the invited guests, as well as much reminiscing from former students and teachers. After a festive lunch, there was an engaging cultural program and celebration. The celebrations ended with words of thanks from the current headmaster.

Special thanks to Br. Bikash Victor D’Rozario, C.S.C., a former Headmaster of Biroidakuni High School, for contributing to this article.