A Holy Man of God with a Mission 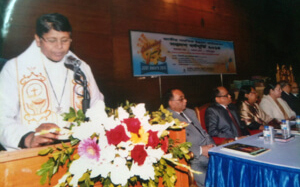 In the spirituality that Holy Cross religious embrace today, it is best to highlight the following major aspects of the founder’s spirituality that he emphasized both in his life and example: Providence, Zeal, Cross, Hope, and Unity. The Congregation’s charism is rooted in spirituality. It is expressed in apostolic focus and inspires community life. When the situation of France went through a violent hostility towards religion and the Church with the growth of secularism and wide-spread de-Christianization, Blessed Basile Moreau called to work for the restoration of the Christian faith and through it for a re-generation of society.

A Faithful and Enthusiastic Disciple of Jesus 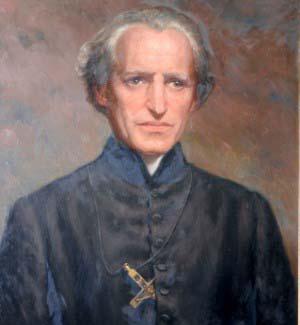 Blessed Basile-Antoine Marie Moreau was a faithful disciple of Jesus Christ, full of enthusiasm and zeal. He was a man of hope. He was chosen and sent by God to his people on this earth to show them the Christian way of life. He could clearly see God in his own life and in others too. He was the spiritual director for a large number of seminarians and young priests. He taught Scripture and Dogma and was assigned as assistant superior in the same seminary from where he became a priest. He wanted a better training for priests in order to raise the standard of teaching in schools and seminaries. Bishop Bouvier recognized him for his innovative teaching and gave him the chair of Holy Scripture.

A Man of Urgency and Organizer

Blessed Basile Moreau was a man of urgency and unpredictable. He gave the Brothers of St. Joseph and the Auxiliary Priests a common mission: to educate the youth and evangelize the countryside. He established the Congregation of Holy Cross as an association of fathers, brothers, and sisters. The Congregation’s main area of ministry was to preach the word of God, especially in rural and foreign missions and to provide Christian education in schools, including training in agriculture and trades, especially for poor and abandoned children. The members of Holy Cross were ready to move into whole world as educators in faith. The founding of Holy Cross was a veritable miracle! Father Moreau would often say that it was “the work of God”.

A Truly Educator of Faith of His Time

Blessed Basile Moreau was a noble teacher and a prominent preacher. The power of his conviction attracted large audiences and led to many conversions. He was invited to preach in different places in Le Mans and in the neighboring dioceses. He was a talented educator and a pioneer in education. For him, Christian education was a work of rebirth and an option for the future. He defended the interests of good education of the youth and the well-being of the country. He promoted priests, brothers, and sisters to preach the Divine Word and to educate the youth by founding not only schools but also boarding schools, workshops, homes for the poor and abandoned children either in France or in foreign missions. 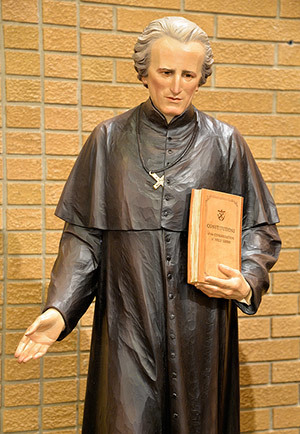 A Good and Holy Shepherd to His People

Blessed Basile Moreau shared his life for 54 years with the people of Le Mans. He was on good terms with the people in the neighborhood, the parents of the students, the Associates of the Good Shepherd and St. Joseph, his benefactors, the town authorities, and the workmen for whom he found employment. Father Moreau’s apostolic dynamism and determination impressed a larger group of people. He was a man full of concern for the poor. He established St. Vincent de Paul Society in his schools and encouraged the pupils to visit poor families with food, clothing, and medicine. He himself distributed food for the poor; he even went out in a boat to bring help to the victims of a flood. He helped the unhealthy people when they were suffering from cholera and other diseases.

A Man of Unfaltering

Blessed Basile Moreau came from a large and united family. He learned from them a sense of duty and work as well as the need to live one’s faith with courage. He was devoted from his youth. He was a man of zeal, humility, gentleness and moderation. He was burning with zeal to serve God, the Church, and society even in austerity. He was a missionary in spirit. He was a man of determination and of action. He had an absolute trust in Providence. He wanted his congregation to be of “one heart” and “one soul” as one united family, like the Holy Family of Nazareth.

A Man of Courage and Confidence

The mystery of the Cross met with a deep and powerful response in the soul of Father Moreau. He gave a motto to his community as “The Cross, Our Only Hope”. Father Moreau himself experienced this Agony, Cross, and Calvary. Several influential members at a general chapter had him ousted as superior general over differences in what direction the Congregation should take. Forced to live apart from the community, he moved in with his sisters. Father Moreau followed Christ by not speaking in his own defense, and carried his cross for a long time.

A Servant of God to Be a Saint Soon

Blessed Basile Moreau is on his way to be a “Saint”. He led a simple, humble, austere, spiritual life by being detached from material goods. He was faithful to his apostolic work until his death on January 20, 1873. He forgave all those who had caused him harm in any way. A man of urgency, unpredictable, and forthright is going to be recognized by the Church as having an exceptional degree of holiness, virtue, benevolence, inner zeal, believing in Christ and likeness of God. For this reason we need to pray to him, and practice his virtues and holiness in our lives and ministries of Holy Cross. 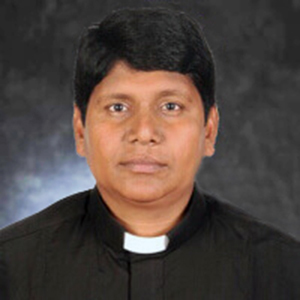 This reflection for the Feast of Blessed Basile Moreau, the founder of the Congregation of Holy Cross, was written by Fr. Anol Terence D’Costa, C.S.C., of the Sacred Heart of Jesus Province in Bangladesh. Having recently completed an Executive MBA from North South University, he works as Associate Pastor at Holy Cross Church in Luxmibazar, Dhaka, in Bangladesh.