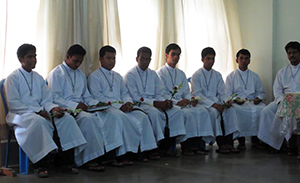 Fr. Pereira was the main celebrant at the Mass, which was attended by a number of Holy Cross priests and brothers, as well as some diocesan clergy and other religious men and women. A reception ceremony and banquet followed the Mass. Fr. Eugene Anjus, C.S.C., the Novice Master, and Br. Kajol Linus Costa, C.S.C., helped organize the day’s liturgy and festivities, as well as host all the guests. 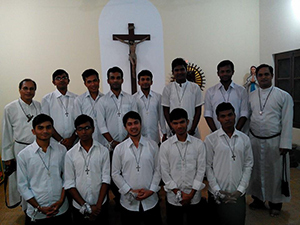 The new year at the Novitiate also sees new member joining the Novitiate staff in Bangladesh. After three years of service on the formation staff, Br. Kajal Linus Costa is going to a renewal course in the East Asian Pastoral Institute in Manila, Philippines. Br. Sattay Richard Purification, C.S.C., has replaced him on the Novitiate staff.

Special thanks to Br. Stephen B. Gomes, C.S.C, and Br. Victor B. D’Rozario, C.S.C., for preparing this news story.