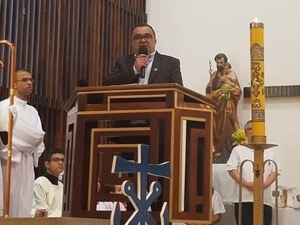 On July 27, 2019, the Holy Cross family in Brazil gathered in São Paulo to celebrate the 75th Anniversary of the arrival of the Congregation of Holy Cross’s first missionaries to the South American country.

The first Holy Cross priests came from Canada to work in a new residential area for industrial workers named Jaguaré. At the time, Jaguaré had no paved streets, no running water, and no electricity. From there, coupled with the arrival of Holy Cross brothers from the United States in 1951, the Congregation spread out over the vast country to serve in schools, social ministries, and parish missions.

Learn more of the history of Holy Cross in Brazil

To celebrate those 75 years, Br. Ronaldo Almeida, C.S.C., the Superior of the District of Brazil, formally opened the celebratory Congress that gathered over 250 Holy Cross religious and lay collaborators at the Congregation’s Colégio Santa Cruz. The theme of the Congress was “Celebrating Achievements and Strengthening Bonds and Commitments.” The Congress was specifically designed to highlight the religious values and philosophical and pedagogical principles promoted by the Congregation’s founder, Blessed Basile Moreau. 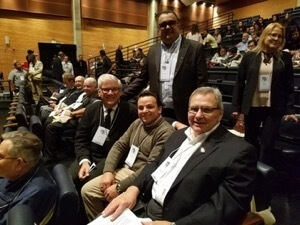 After an opening prayer by professed seminarian Mr. Rivaldo Oliveira, C.S.C., Br. Thomas Dziekan (MP), Provincial, and Br. Paul Bednarczyk, Vicar and First General Assistant, each gave brief talks on the significance of the Holy Cross charism in the development of the Brazilian mission. They, along with Br. Ronaldo, also “cut the ribbon” premiering an exposition on the history of the District. This exposition will travel to each of the ministries throughout the year. With an intentional emphasis on the Holy Cross charism of education, the morning also included a presentation by Br. Alfonso Murad, F.M.S., Ph.D. on “Humanistic Education: Solidarity and Inclusivity.”

After an elegant buffet lunch, the afternoon featured presentations on each of the District’s three schools and seven social outreach programs, and how they live and promote the Holy Cross charism and mission in their individual ministries.

As a way to highlight Father Moreau’s commitment to the arts, a pianist, string quartet, and guitarist interspersed musical interludes throughout the day. Original artwork of St. Joseph Oratory and Notre-Dame de Sainte-Croix in Le Mans, commissioned by Colégio Santa Cruz, were also unveiled and which will adorn the lobby of the school in tribute to the occasion. 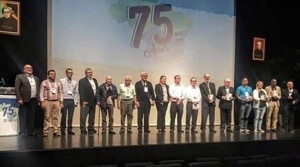 To conclude the program, Br. Ronaldo recognized and paid homage to significant people in the District, including Fr. José Prado, C.S.C., the first Holy Cross religious in the District. In addition to a plaque, he presented a book of reflections to the assembly on Holy Cross Education, a publication that is a collaborative effort of the three schools in the District.

Explore the educational apostolates of the Congregation 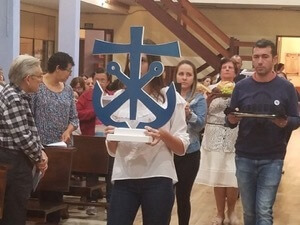 The Sisters of Holy Cross ministering in South America, who were in assembly that weekend, joined the District for Mass. A champagne reception followed in the parish hall.

“The celebration brought together, in a fraternal spirit, religious sisters, brothers and priests as well as lay collaborators who work in the various ministries developed in Brazilian lands," said Br. Almeida. "It was a day of homage and recognition to the many who made and make the history of the Congregation of Santa Cruz in Brazil, aware of their role in dignifying a work that belongs to God.

“That is why the summit was reached in true communion through the Eucharistic celebration in the St. Joseph Parish in the Jaguaré district, which is exactly where the Congregation, 75 years ago, made its first address in Brazil," he continued. "The family spirit was remarkable at all times of the historic day, giving life to Moreau's dream and commitment, in harmony and mutual trust, to the search for a better world." 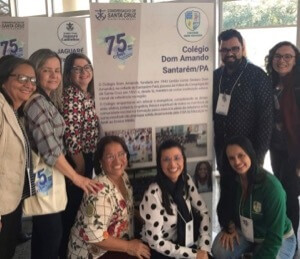 Reflecting further on that familial spirit, Br. Almeida added, “With the celebration of the 75th anniversary of the presence of the Congregation of Holy Cross in Brazil, the growing sense of belonging and zeal on the part of the lay collaborators of the Mission is clear, allowing us as a Congregation of Holy Cross a promising future. It was a moment of strengthening the bonds that unite us and reaffirming our commitments to the Congregation of the Holy Cross, which, above all, is God's work and pleases Him. We have had the opportunity, strengthened by unity and fraternity, to confirm that in our diversity we find the unity that comes from the inspiration in the values ​​and principles bequeathed to us by our founder."

Br. Almeida concluded, “May Moreau intercede with the Lord for the Mission of the Congregation in Brazil, for our dreams and for the vigor with which we ratify our purpose for action for the common good!”