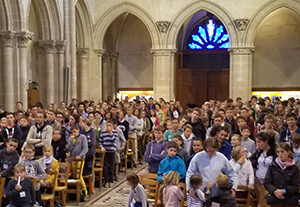 On September 15, the Congregation of Holy Cross celebrated the tenth anniversary of the beatification of its founder, Blessed Basile Moreau. While there were celebrations throughout Holy Cross, none were more meaningful than those in France—the country where Moreau was born, where he founded Holy Cross, and where he was beatified in 2007. 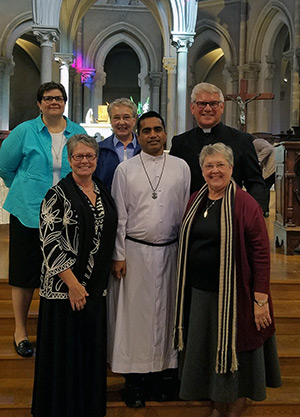 “The Congregation of Holy Cross owes a debt of gratitude to Fr. John DeRiso, C.S.C., Rector of the International Shrine of Basile Moreau, and his staff for their tremendous planning, preparation, and hard work for making this milestone event both successful and memorable,” added Br. Bednarcyzk. “We also express our appreciation to Fr. Romuald Fresnais, Superior, members of the Vicariate, and the Marianites of Holy Cross, for their participation and support of this anniversary commemoration and their continued devotion to our beloved founder, Blessed Basile Moreau.”

The weekend festivities actually began on Thursday, September 14, when over 400 faculty and students of Lycée Notre-Dame d’Orveau celebrated the Feast of Exaltation of the Cross with a special Mass at Notre-Dame de Sainte-Croix. Fr. Paul Valentin, C.S.C., the school’s Campus Minister, was the presider and homilist.

After the Mass, in the presence of the student body, Fr. Romuald Fresnais, C.S.C., Superior of the Vicariate of France, received two new postulants into the pre-novitiate program. Their entrance into the initial formation in the Congregation comes on the heels of the Ordination of Fr. Marc Valentin, C.S.C., earlier this year on Sunday, June 25, in the Saint Maurice Cathedral of Angers, France.

On Friday, the Feast of Our Lady of Sorrows, the celebrations moved to the Church of Notre-Dame de Sainte-Croix, which was built by Blessed Moreau as a symbol of the unity of the priests, brothers, and sisters of Holy Cross. It is the site of Blessed Moreau’s burial place. 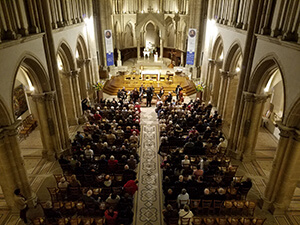 While Notre-Dame de Sainte-Croix continues to operate as a parish community, since September 21, 2014, the church has also served as the home to the International Shrine of Basile Moreau. The shrine serves to promote and spread the rich spiritual legacy of Blessed Moreau.

The Holy Cross Family gathered in Notre-Dame de Sainte-Croix with the parish community for Solemn Vespers. Later that evening and in recognition of Fr. Moreau’s patronage of the arts, the Shrine was filled with the music of Handel, Hayden, Vivaldi, and Schubert as the Orchestra de ”Concerts du Mans”, under the direction of Dominique Fanal, performed a concert. The featured soprano soloist was Diana Higbee. 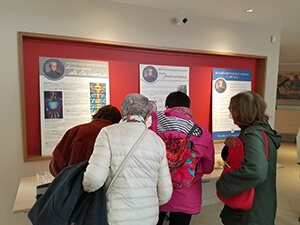 Then, on Saturday, September 16, the Shrine hosted Archbishop Jean-Louis Bruguès, O.P., Vatican Archivist and Librarian, who gave a lecture at Maison Saint-Julian, the Diocesan Pastoral Center, titled “In the School of the Saints.”

There was a spirited discussion following the Archbishop’s talk, as the guests were clearly interested in learning more about the life of Blessed Moreau. Participants also had the opportunity to view a wonderfully, informative exposition on the life and works of Fr. Moreau at the diocesan center.

Archbishop Bruguès then presided at a Vigil Prayer Service at the Shrine at which both Br. Gomes and Fr. Marc Valentin shared testimonies on how Fr. Moreau inspired them in their vocation. 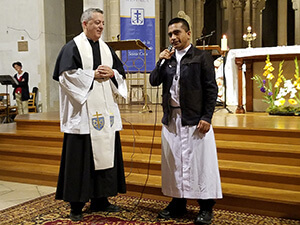 “It was so significant to me to give my testimony of my vocation in Holy Cross, to recall the sacrifices of the missionaries for the mission of Bangladesh, and to express my gratitude to them,” said Br. Gomes.

After an opportunity for all of the faithful to venerate the mission cross of Father Moreau, the Vigil ended with Exposition of the Blessed Sacrament and Eucharistic Adoration for the rest of the night.

Sunday afternoon featured the closing Mass of the weekend’s celebration with the Most Rev. Yves Le Saux, Bishop of the Diocese of Le Mans, as the main celebrant and homilist. Other prominent guests at the Mass included the Congregational Leadership Team of the Marianites of Holy Cross, local diocesan clergy, and two direct descendants of Blessed Moreau.

The Mass was a beautiful end to a beautiful weekend, yet it was also hopefully the beginning to a deeper devotion to and spiritual communion with the Holy Cross founder. 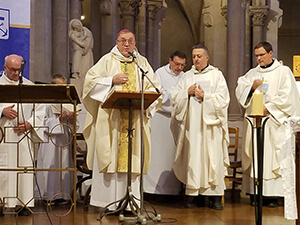 “The 10th-anniversary celebration at Le Mans was an opportunity to know the life, works, and charism of Fr. Moreau more profoundly for me, for our confreres, and for the people with whom we associate in our ministries,” said Br. Gomes. “It was a time for me to reflect how our charism and spirituality are being lived out on a daily basis through our ministries.

"At the same time, I feel personally we need to find out how we can increase and promote of devotion to Basile Antoine Marie Moreau in our Congregation as well as with whom and for whom we work," he added.

“The celebration of the 10th-anniversary of the beatification of Father Moreau was an opportunity for the Church in Le Mans to not only rediscover this important figure whose spirituality and whose zeal in the service of the Gospel inspires the faithful of today, but also to find in him a powerful intercessor and friend along the journey of Christian discipleship,” said Fr. DeRiso, C.S.C. “For the religious family of Holy Cross in France and around the world, the celebration of this anniversary helped to renew our own commitment to follow Christ in the footsteps of our Founder and to reignite within us that burning desire to make God known, loved and served.”