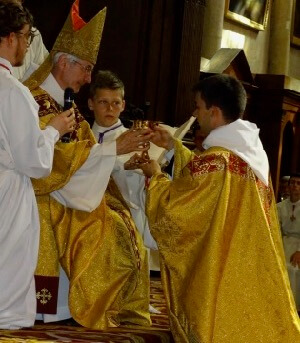 On Sunday, June 25, 2017, in the Saint Maurice Cathedral of Angers, France—not far from where Blessed Basile Moreau founded the Congregation of Holy Cross—Fr. Marc Valentin, C.S.C., was ordained to the priesthood. His was the first ordination for the Congregation’s Vicariate of France since 2008, when Fr. Marc’s brother, Fr. Paul Valentin, C.S.C., was ordained a Holy Cross priest.

This great occasion of joy for the local Church and the Congregation of Holy Cross drew over 2,000 people, filling the beautiful cathedral for the Mass. After the Ordination, the Holy Cross Community and Fr. Marc’s family and friends gathered at the Catholic University for a celebratory dinner.

The following day, Monday, June 26, Fr. Marc celebrated his first Mass at the Congregation’s Conventual Church, Notre-Dame-de-Sainte-Croix in Le Mans. The altar at which he presided is just a few meters from the tomb of Blessed Moreau.

Notre-Dame-de-Sainte-Croix was built by Blessed Moreau to be a symbol of the unity of the Holy Cross family, and he considered its construction and consecration was one of his most important works and greatest joys. Today it is the home to the International Shrine of Basile Moreau, which serves to spread his spiritual legacy.

Learn more about the Shrine to Basile Moreau 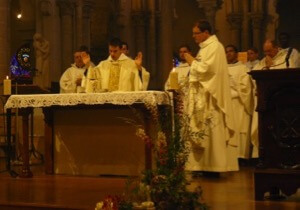 “While concelebrating at Marc's first Mass, I was standing by the altar in such a way that I could also see Blessed Basil Moreau's tomb against the south wall of the church. During the Eucharistic Prayer, I suddenly had an incredibly vivid image of Fr. Moreau, our blessed founder, literally watching Marc celebrate his first Mass,” said Fr. Michael Palmer, C.S.C., a Novitiate classmate of Fr. Marc’s who himself was just recently ordained on April 22, 2017. “I suddenly imagined how proud [Blessed Moreau] must be that even after all these decades, he could see that the Lord is still blessing Holy Cross with the fruit of vocations!”

Prior to his priestly Ordination, Fr. Marc did his diaconal ministry, including teaching, at Notre Dame d’Orveau. That is also where he made his Final Profession on October 7, 2016. In addition to his work as Vicariate Vocation Director, Fr. Marc will soon assume his new ministry as Campus Minister at Saint Michel de Picpus in Paris.

Special thanks to Fr. Michael Palmer, C.S.C., and Br. Paul Bednarczyk, C.S.C., for contributing to this article.