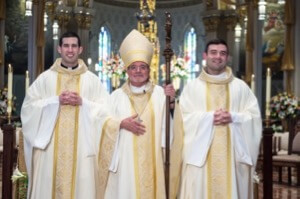 Keeping with its tradition, the United States Province celebrated its priestly ordinations on Easter Saturday in the Basilica of the Sacred Heart on the campus of the University of Notre Dame, in Notre Dame, Indiana. On April 22, two young deacons, Michael Patrick Palmer, C.S.C., and Ryan Joseph Pietrocarlo, C.S.C., were ordained by the Most Rev. Arthur J. Colgan, C.S.C., Auxiliary Bishop of Chosica, Perú.

“I am truly happy that God has called me to serve the Church and the world as an ordained priest,” wrote Deacon Palmer. “I pray that God may guide my own hands with that same love and gentleness throughout my life of ministry. And I hope that when I come to the end of my days, I can look back at this weekend and thank God for entrusting this humble shepherd with the loving care of God’s sons and daughters.”

“I am sure it will take some time to sink in; I imagine it will take my whole life to fathom and know the priestly identity that will be bestowed on me, but I know this is the time. God has called me; He has led me; He has prepared me,” wrote Deacon Pietrocarlo. “May His grace carry me throughout my priesthood to be a priest close to His heart so that I can transmit His presence to a world that deeply longs for it.”

Explore a Gallery of Photos from Ordinations worldwide

The festivities for the Ordination weekend officially began with a special prayer service at Moreau Seminary on Friday night, April 21. Fr. Kevin Russeau, C.S.C., who served as a formator for Palmer and Pietrocarlo at both Old College Undergraduate Seminary in Notre Dame, Indiana, and the Holy Cross Novitiate in Cascade, Colorado, presided and preached. During the ceremony, the chalices that the young men were receiving as gifts from their families were blessed. 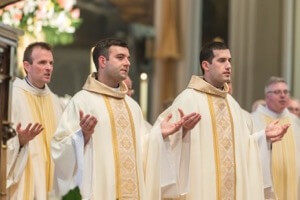 The Ordination Mass began at 2pm in the Basilica. In addition to the usual crowd of family, friends, and Holy Cross religious, there was a large turnout of parishioners from the two local parishes in South Bend, Indiana, where Palmer and Pietrocarlo served this past year as deacons. Deacon Palmer was at Christ the King Parish, and Pietrocarlo was at St. Adalbert and St. Casimir Parishes.

The ordaining bishop was the Most Rev. Arthur J. Colgan, C.S.C., the Auxiliary Bishop of Chosica, Perú. Bishop Colgan had also ordained the two men deacons back on August 28, 2016, after their Final Professions on August 27, 2016.

Following the Ordination Mass, there was a reception for the newly ordained in the Main Building of the University of Notre Dame. Later there was a dinner for the Holy Cross community and the families and friends of Frs. Palmer and Pietrocarlo. 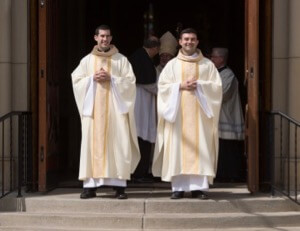 “The seed of service and witness you've planted during your time in formation is now further nourished by your ordination as priests,” commented Fr. Thomas J. O’Hara, C.S.C., Superior of the United States Province, to the two new priests. “Let now the effect take root and continue to blossom as you carry out your ministries.”

Fr. Palmer and Fr. Peitrocarlo both celebrated Masses of Thanksgiving in their respective parishes on Sunday, April 23. It was a chance for both of them to give thanks with the people who have walked with them this past year.