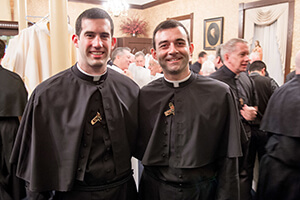 This past Saturday, August 27, at the Basilica of the Sacred Heart on the campus of the University of Notre Dame in Notre Dame, Indiana, the Congregation of Holy Cross celebrated the Final Professions of Mr. Michael Palmer, C.S.C., and Mr. Ryan Pietrocarlo, C.S.C. Both are members of the United States Province, and their vows were received by Fr. Thomas J. O'Hara, Superior of the Province.

"At a time when so many choose to believe in nothing and think of nothing but themselves, how inspiring that Michael Palmer and Ryan Pietrocarlo believe so much in Jesus Christ and the Gospel that they're ready and willing to lay down their lives for Him, professing the ancient vows of poverty, chastity and obedience in the Congregation of Holy Cross," said Fr. John Herman, C.S.C., Rector of Moreau Seminary.

Read more news about Final Professions in the Congregation

The celebrations of Palmer and Pietrocarlo's Final Vows actually began the day before, Friday, August 28, in a candlelit prayer service held at the Moreau Seminary Chapel. The chapel was packed with not only Holy Cross priests, brothers, and sisters and members of the Palmer and Pietrocarlo families, but also many of the men's friends and colleagues. Fr. Charlie Kohlerman, C.S.C., who had been a Formation Chaplain to the men during their time in initial formation, presided and preached.

Following the prayer service, there was a celebratory social in basement of the seminary.

The Mass of Final Profession began Saturday morning at 10:00 a.m. Like the night before, the Mass was attended by the men's families, friends, and colleagues, as well as countless Holy Cross priests, brothers, and sisters. The Mass also drew many vocation prospects and students from the Notre Dame campus. 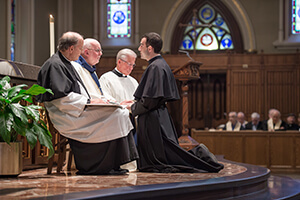 Fr. O'Hara presided and preached the Mass. After receiving the men's Final Vows according to the Consitutions of the Congregation of Holy Cross, Fr. O'Hara gave to each man the Final Profession Crucifix that, as members of the Society of Priests, they will now wear with their Holy Cross habit.

A festive brunch for the guests followed the Mass in the Basilica. It was a chance to congratulate the two new finally professed and celebrate as the wider Holy Cross family.

The following day, Sunday, August 28, Palmer and Pietrocarlo were ordained deacons in a Mass at the Moreau Seminary Chapel. The Most Rev. Arthur Colgan, C.S.C., Auxiliary Bishop of Diocese of Chosica, Peru, presided and ordained the two men. It was Bishop Colgan's first time as the main celebrant at one of the Congregation's Ordinations. 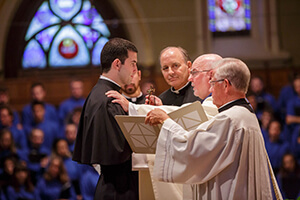 One of the unique characteristics of this year's Ordination class for the United States Province is that both Palmer and Pietrocarlo entered the Congregation through the Province's Old College Undergraduate Seminary. The formation program of Old College is for young men, age 18-22, in their undergratudate university studies. This year the Old College program boasts 11 men in formation, and seeing two of their own profess Final Vows was a great source of inspiration.

"It is always enriching for the Old Collegians to witness Final Profession. Even though they are at the earliest stages of formation, to see others make the commitment to Holy Cross is often a source of great encouragement and motivation," said Fr. Brian Ching, C.S.C., Rector of Old College. "The journey from Old College to Final Vows is a long one and these weekends are an important and joyful reminder that initial formation is just the beginning of a joy-filled life as a religious of Holy Cross.

"To see two men, who once looked down the same road, make that final commitment to Holy Cross, is a great sign of hope that God is very much active and present during the time of initial formation and that though the road may seem long, when spent listening to the Lord and trusting in his Providence, it is journey well worth it," he said.

Deacons Palmer and Pietrocarlo now return to the parishes where they have been assigned for their deaconal service. Both are at parishes in South Bend, Indiana, administered by Holy Cross. Deacon Palmer is serving at Christ the King Parish, and Deacon Pietrocarlo is working at Saint Adalbert and Saint Casimir Parishes. 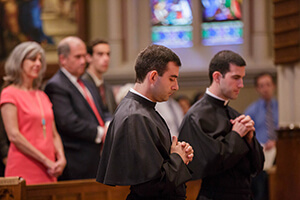 "This indeed has been an incredible journey, yet it is only just the beginning," said Deacon Pietroclaro. "I look back with gratitude on everything that I have experienced and look forward with great hope for what is to come. I know God has been guiding me all along and I know that it will be only by his guidance will I be able to fulfill what I am to promise. By taking my final vows, I dedicate myself to the themes I mentioned above most intently, and also allow God to work through me more completely and freely to guide me more and more to building up his Kingdom in the world."

"The Lord, in his goodness, has called me to throw in my lot with a band of men who have given all to follow Christ—the poor, chaste, and obedient One," said Deacon Palmer. "I hope and pray that I may faithfully serve the Church and lead others to eternal life by binding myself to Holy Cross forever. And no matter what this life may bring, may the final ten words of our Constitutions be ever-emblazoned in my heart and mind: It is the Lord Jesus calling us. 'Come. Follow me.'"

Special thanks to Matt Cashore for the first two pictures and to Peter Ringenberg for the second two pictures.