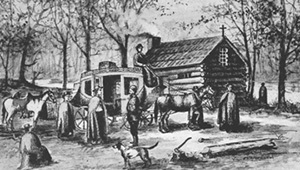 Blessed Basile Moreau sent the first group of Holy Cross missionaries to the United States in 1841, just four years after having founded the Congregation. Moreau was responding to the request of the Bishop of Vincennes, Indiana, for religious educators.

In November 1842, these religious, one priest and seven brothers, founded the University of Notre Dame and Sacred Heart Parish near South Bend, Indiana.

From Notre Dame, the Congregation quickly spread out across the United States, responding to the increasing needs of the growing Catholic population in places like New Orleans, Austin, and New York. These early decades, however, were not without their hardships, including outbreaks of diseases that claimed the lives of many religious.

Following the suppression of religious orders in France in 1903, the United States and Canada became the foci of the Congregation’s growth and expansion in the early 20th Century. Numerous educational institutions, parishes, and other ministries, including outreach to the poor, were founded across the United States during these decades.

From the beginning, a strong commitment to Catholic education at all levels, from primary schools to colleges and universities, has defined much of the work of the Congregation in the United States.

Though most well-known for University of Notre Dame, one of the premier Catholic research universities in the world, the Congregation runs five other colleges and universities in the United States. They are: St. Edward’s University in Austin, Texas; University of Portland, in Portland, Oregon; Stonehill College in Easton, Massachusetts; King’s College in Wilkes-Barre, Pennsylvania; and Holy Cross College in Notre Dame, Indiana. All of these colleges and universities are seen as leaders in their respective categories for providing a rigorous and holistic education.

Whatch videos on the Congregation's history and charism

In our relatively prosperous country we still find many of our brothers and sisters facing darkness. We challenge the minds of the powerful to think ethically and justly and to have hearts that are compassionate and loving. We cultivate the minds of the poor so they can see new possibilities for life and their hearts so that they are comforted by God’s loving presence. – Rev. Tomas J. O’Hara, C.S.C.   Read more ...

Holy Cross also sponsors secondary schools across the country, and the majority of the sponsored parishes have grade schools. Through the Holy Cross Institute at St. Edward’s and the Alliance for Catholic Education at Notre Dame, the Congregation is working to ensure the quality and availability of Catholic education for the next generation.

The Congregation continues its work in parochial ministry, both administering parishes and providing assistance to dioceses. It also has several ministries that not only reach out to the poor and marginalized, but also seek to draw others into this work.

Our mission in the United States is to transform the lives of those with whom we work. In the same way that a Holy Cross school without a service dimension makes little sense, all of our ministries are meant to draw others to service. – Br. Donald Blauvelt, C.S.C.   Read more ...

The United States is also home the headquarters of Holy Cross Family Ministries, which was founded by Servant of God, Fr. Patrick Peyton, C.S.C. to promote family prayer, especially with the Rosary. HCFM includes Family Theater Productions in Hollywood. It carries its founder’s message that “a family that prays together, stays together” across the world, including all 16 countries in which the Congregation serves.

We seek to speak boldly of the hope we have found in God so that God might be known, loved, and served by all. – Br. Lawrence Stewart, C.S.C.   Read more ...

For a listing of the Congregation's schools, parishes, and other apostolic works in United States, check out the ministries page.