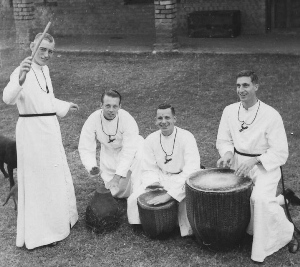 Having received an invitation through Propaganda Fide, the Congregation of Holy Cross sent missionaries from the United States to Uganda in 1958. The first group, which consisted of four priests, arrived on November 4. They were led by Servant of God, Fr. Vincent J. McCauley, C.S.C., who later became the first Bishop of the Diocese of Fort Portal. Within a year, they were joined by three brothers.

The Congregation was entrusted with the northern part of Mbarara Diocese, which later evolved into the present-day dioceses of Fort Portal, Hoima, and Kasese. During the 1960s, Holy Cross brothers and priests dedicated themselves to establishing and building up the local Church in Uganda through pastoral work and education.

Special attention was given both to basic evangelization and to educational and social development. This included the construction of basic infrastructure, including churches, schools, and clinics.

The military coup on January 25, 1971, and the rise to power of Idi Amin Dada ushered in eight years of persecution, violence, and suffering for Uganda. Despite political pressure and threats of violence against its missionaries, the Congregation remained in Uganda, ministering to the needs of the people.

The 1980s marked a new beginning for the life and work of Holy Cross in East Africa. For the first time, the Congregation began accepting vocations from Africa. Prior to that, all vocations had been directed to the dioceses so as to establish the local clergy and the local church. Since then, there has been a steady stream of vocations, building up the Congregation in the region.

I am challenged by the zeal shown by those first Holy Cross missionaries to be zealous in the tasks assigned to me, that just like them, the men I help form will be hope for the people of Uganda of today and tomorrow. – Rev. Ronnie Nguvu, C.S.C.   Read more ... 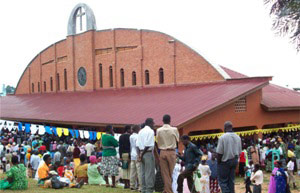 Jinja, Uganda, is home to St. Andre Formation House for young men aspiring to become priest or brother candidates in Holy Cross, and is located near the picturesque headwaters of the Nile River. The Holy Cross Novitiate for East Africa is located at the edge of Lake Saaka, near the city of Fort Portal.

The work of Holy Cross in Uganda is conducted by the District of East Africa (Kampala, Uganda), which also includes Kenya and Tanzania.

For a listing of the Congregation's schools, parishes, and other apostolic works in Uganda, check out the ministries page.