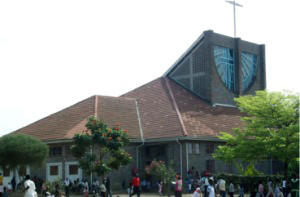 Missionaries of the Congregation of Holy Cross arrived to Kenya from Uganda in 1978. That same year they established Holy Cross Parish in Dandora, which at the time was a newly developing low-income housing project on the outskirts of Nairobi. Originally planned for only 40,000 residents, Dandora quickly swelled into a teeming home of over a quarter million people, most of whom are poor.

Explore a Photo Gallery of Parishes Around the World

Our Constitutions tell us that "as disciples of Jesus we stand side by side with all people" precisely so that together we might "form communities of the coming kingdom." As we have witnessed in fledgling but beautiful ways in Kenya, this work involves drawing people together into a unity in which diversity is both safe and celebrated. – Rev. Tom Smith, C.S.C.   Read more ... 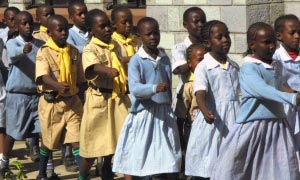 Today, Holy Cross Parish remains the center of the ministerial work of the Congregation in Kenya and stands as an oasis of hope amidst the squalor and despair of Dandora slum. The parish is unique in Nairobi with its strong emphasis on lay leadership and the presence of numerous small Christian communities.

The ministries of the parish include St. James Nursery and Primary School, the Brother André Dispensary, a tailoring school for women, and a microfinance lending program. 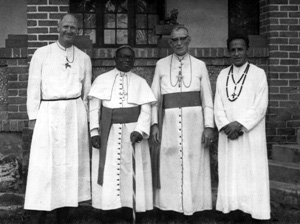 As educators in the faith, Holy Cross also has been instrumental in Catholic Higher Education in Kenya. Servant of God, Bishop Vincent McCauley was instrumental in raising funds for the establishment of the Catholic University of Eastern Africa in Nairobi in 1984. The Congregation was also a founding member of Tangaza College in Nairobi, which opened in 1986 to provide theological training for seminarians of religious congregations in East Africa.

Nairobi, Kenya, is also the home of McCauley Formation House, which is the formation house for the Congregation’s professed seminarians and brothers in East Africa.

The work of the Congregation of Holy Cross in Kenya is conducted by the District of East Africa, which also includes Uganda and Tanzania.

For a listing of the Congregation's schools, parishes, and other apostolic works in Kenya, check out the ministries page.