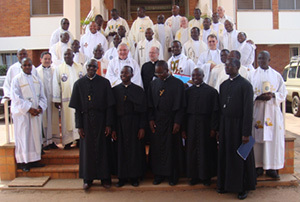 “I felt a failure. I was tempted to run, but then I understood that here was my call as a Holy Cross religious – to reconcile divided neighbors, to help them to see that their unity in Christ goes deeper than their easily manipulated ethnic or political differences.”

These words were written by a young priest working in Dandora shortly after his own parishioners took up crude weapons against one another and set fire to one another’s homes in the 2007-08 post-election violence in Kenya.

Dandora is a low-income housing project on the outskirts of Nairobi. Most would call it a slum. It was planned to offer residence to 40,000, but now it is home to more than a quarter million mostly young, unemployed or very underemployed poor people of many languages and diverse ethnic and tribal backgrounds. Holy Cross has been here, standing side-by-side with the people through all their joys and struggles, since the beginning, having founded Holy Cross Parish in Dandora in 1978. 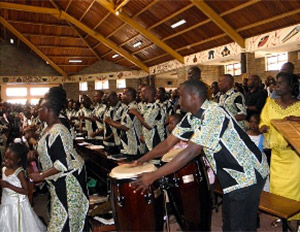 Thus, by refusing to run away and by staying with the residents in Dandora in the midst of those post-election riots, that young priest stood in the long line of Holy Cross religious who served before him. He and the parish team worked with their Justice and Peace Committee to organize and animate reconciliation prayers and seminars. Today, Holy Cross Parish Dandora is a joyful, faith-filled model of multi-cultural unity in a fragile society.

Our Constitutions tell us that “as disciples of Jesus we stand side by side with all people” precisely so that together we might “form communities of the coming kingdom.”

As we have witnessed in fledgling but beautiful ways in Kenya, this work involves drawing people together into a unity in which diversity is both safe and celebrated. It is a unity that is ultimately grounded in Christ who prayed that we all might be one as He and the Father are one.