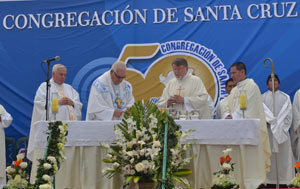 In a solemn Mass of Thanksgiving, last Sunday on the Feast of Our Lady of Sorrows, the Congregation of Holy Cross brought to a close the celebrations of the 50th anniversary of its arrival to Peru. The Bishop of Chosica, Most Rev. Norbert Strotmann, MSC, presided at the Mass, which drew over 2,500 people.

Prior to the feast day, the Holy Cross community in Peru, along with many friends, prayed a novena of Masses, celebrated each night in a different chapel of Señor de la Esperanza Parish. Family, Prayer, Divine Province, Eucharist, Apostolic Zeal, the Cross, Holy Cross Devotions, Christian Education, and the Signs of the Times were the topics reflected upon by the various Holy Cross priests who presided over the Novena Masses. 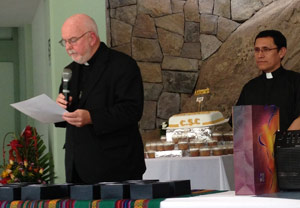 That same evening, Rev. James McDonald, C.S.C., Assistant Provincial of the United States Province, preached at the Mass, as part of the novena of Masses. Following the Mass, there was a fireworks display, and a band came and played music. Many people stayed late into the night singing and dancing.

“What I felt in that packed church, the gifts, the toast, the fireworks, and the singing and dancing was a great sense of love that the people have for Holy Cross for all that has been accomplished in the 50 years to this point and all the amazing work that is still being done,” said Fr. O’Hara.

Read more about the Holy Cross Ministries in Peru 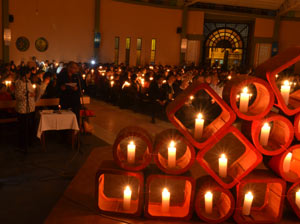 The year-long Golden Jubilee began to draw near to its conclusion on Saturday, September 14, with an evening Vigil celebrated in a Taize-style setting created for the occasion in the parish’s Holy Cross Chapel. The title given to the vigil was “Memory, Music, and Prayer." Texts, supported by projected images, were read on the history of Holy Cross in Peru and on essential elements of the Congregation’s charism and spirituality.

The centerpiece, which supported the extensive reflection, was the choir and musical ensemble, which had been preparing for the prayer service for several months. Young musicians gathered from the parish, school, and beyond. Among them were orchestra and lyric professionals along with elementary school children who had honed their recorder skills over that last semester in classes offered by the parish. The music included themes from Gabriel’s Oboe, Laudate Domine, Anima Christi, Ven Espírtu de Dios, as well as original music composed for the occasion.

Following Benediction with the Blessed Sacrament, the District Superior, Rev. Aníbal Niño Loarte, C.S.C., blessed the new 7-foot statue of Our Lady of Sorrows, sculptured by a local Peruvian artist. 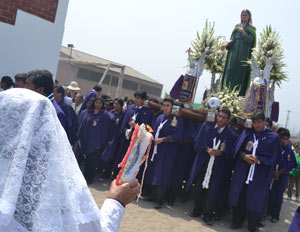 On Sunday morning, September 15, people from all of the Holy Cross apostolates in Peru, gathered outside Holy Cross Chapel to begin a 3-hour-long, colorful and multitudinous procession through the streets and narrow passages of Canto Grande. In the procession, the statue of Our Lady of Sorrows, which had been blessed the night prior at the Vigil, was carried. The final destination of the procession was the Fe y Alegría School, where the concluding Mass was held.

In addition to Bishop Strotmann, the emeritus Bishop of Chimbote and close Holy Cross friend, Most Rev. Luis Bambarén, SJ, was also present, as were many diocesan priests. They joined Holy Cross religious who had come to Canto Grande from Brazil, Chile, Mexico, Rome, and the United States to celebrate the occasion. Especially commented was the presence of the Sisters of the Holy Cross and the Sisters of the Congregation of Holy Cross, as well as members of many other religious congregations who have worked with the Congregation in Peru over the years.

Bishop Strotmann expressed his profound gratitude for the Congregation's 50 years of service to the Church in Peru, but especially for the generous and visionary leadership Holy Cross has provided for the local Church of Chosica, where Holy Cross has served since his appointment as the first bishop of the Diocese.

At the conclusion of the Liturgy, the members of the Congregation presented a plaque of appreciation to Fr. Niño Loarte, the current superior of the district who is also the first Peruvian to lead the Congregation in Peru. In turn, in the name of his Holy Cross brothers, Fr. Niño Loarte thanked all those who have shared this road with the Congregation: “We thank the Lord of Life and of History for His beloved people whose care He has entrusted to us, and for all the grace and blessings we have received during these fifty years.”