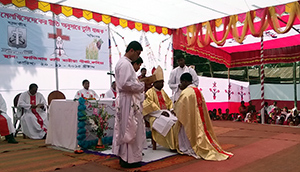 In the month of November, the Congregation of Holy Cross celebrated two priestly ordinations in Bangladesh. Fr. Paschal Babu Sarkar, C.S.C., was ordained on November 20, 2015, and one week later on November 27, Fr. Ashis Aloysius Rozario, C.S.C. Both men are members of the Sacred Heart of Jesus Province, based in Dhaka, Bangladesh.

“As a Vocation Director and member of the Province, I believe that we are growing in the fertile land of Bangladesh as the religious priests that Blessed Basile Moreau had dreamed from the beginning of his Bengal Mission,” said Fr. Swapan Das, C.S.C. “These Ordinations also provide to the children, youths, parents, faithful, and people of other faiths in this consumeristic world the witness of Christ and of self-sacrifice for the sake of God's Kingdom."

Learn more about the Congregation's founder 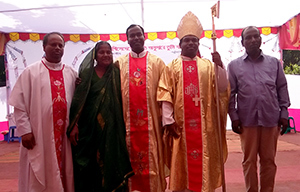 The Ordination Mass for Fr. Paschal, the first of the two to be ordained, was held Fatima Rani Church, Ruhea. The day before his Ordination, November 19, there was a “Mongal Onusthan” which is a ritual of preparation before receiving the Sacrament of Holy Orders, as well as Adoration of the Blessed Sacrament. Many people came to pray for Paschal in a special way that he might receive worthily the Sacrament of Holy Orders and be faithful to his vows of chastity, poverty, and obedience.

The Most Rev. Sebastian Tudu, D.D., Bishop of Dinajpur, presided and preached at the Ordination Mass on November 20. It was attended by not only Fr. Paschal’s mother, brothers, and relatives, but also many lay men and women, including a large number of children and youth. As custom, there were also many Holy Cross religious priests, brothers, and sisters present, as well as many other priests and religious.

After a Mass of Thanksgiving on November 21, Fr. Paschal is now working at Sacred Heart of Jesus Church, Khalippur, in the Diocese of Dinajpur. 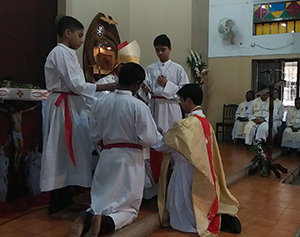 Fr. Ashis’s Ordination also began the day before the Mass, November 26, with a Mongal Onusthan and Eucharistic Adoration. It was very well attended, showering Ashis with prayers and blessings before the Sacrament of Holy Orders.

The Most Rev. Patrick D’Rozario, C.S.C., Archbishop of Archdiocese of Dhaka, presided and preached at the Ordination Mass, which took place on November 27 at Mary Queen of Apostles Church, Mirpur, Dhaka. In addition to the many Holy Cross religious in attendance and Ashis’s own family, there were many other priests, religious, and lay faithful who participated in the Mass.

Fr. Ashis celebrated a Mass of Thanksgiving on November 28, asking for the graces of God in his life and ministry and imploring God’s blessing on all who helped him grow in his religious life and priesthood. 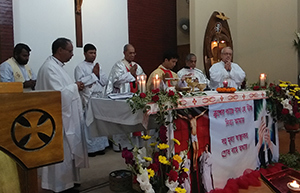 Since his Ordination, like Fr. Paschal, Fr. Ashis has been assigned to parish ministry. He is currently working at the Church of Our Lady of Guidance, Padrishibpur, in the Barisal region, which is a part of the Diocese of Chittagong.