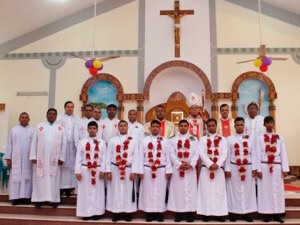 Joy filled the Congregation of Holy Cross in Bangladesh in the month of January as it celebrated the Final Professions of nine brothers of the St. Joseph Province.

“I thank God for calling these nine brothers into the Congregation of Holy Cross. I also thank the brothers for their response to God by saying, ‘yes,’” said Br. Subal Rozario, C.S.C., Superior of the St. Joseph Province. “It’s a great blessing to have nine scholastic brothers making Final Vows in a month. Certainly, it is a profound joy and gratitude that we in Holy Cross share with the Church and the people.”

The nine Final Professions were spread over three separate ceremonies. The first was also the largest, with seven brothers professing Final Vows in a Mass celebrated by Cardinal Patrick D’Rozario, C.S.C., on January 4, 2019, at the Mutbari Parish. Over 1,500 people attended the celebration, including many family members and friends of the brothers professing Final Vows, as well as their confreres in the Congregation. 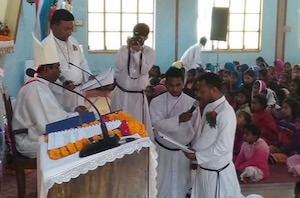 Two weeks later on January 18, Br. Lucas Mona, C.S.C., professed his Final Vows in his home Diocese of Dinajpur. The local Bishop, the Most Rev. Sebastian Tudu, presided and preached at the Mass. Once again, several Holy Cross religious were present to support Br. Lucas in his final commitment.

The last to make his Final Profession was Br. Roktim Lebio Chiran, C.S.C., on January 27. The celebration was held in his home Diocese of Mymensing. Since Br. Rotkim belongs to a tribal group, the ceremony took place following the local tribal traditions in his village of Jalabadha. Presiding at the Mass was the Most Rev. Paul Ponen Kubi, C.S.C., Bishop of the Diocese of Mymensing Also in attendance was the Most Rev. Subrata Lawrence Howlader, C.S.C., Bishop of the Diocese of Barisal. 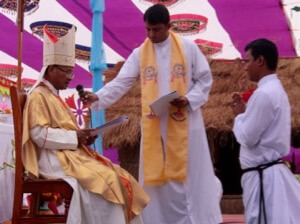 “These Final Vows celebrations are the fruit of the sacrifices that our missionaries made for us, the Church, and the Congregation, and in that way we maintain the Holy Cross legacy,” said Br Subal. “These celebrations will inspire many young men to join the religious and priestly vocations.”