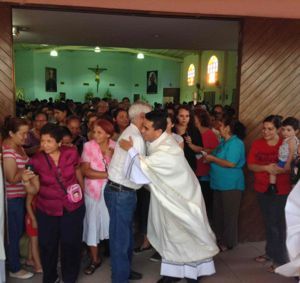 This past Friday, June 27, Deacon Jorge Armando Morales Trejo, C.S.C., was ordained a priest by the Most Rev. Rogelio Cabrera Lopez, the Archbishop of Monterrey. The Ordination Mass took place in the parish of Nuestra Madre Santísima de La Luz in Guadalupe, Nuevo León, Mexico.

The celebration actually began the day before on Thursday, June 26, with Mass at Nuestra Señora del Roble, the neighborhood chapel near the Congregation's House of Formation in Mexico. At that Mass, the chalice, patent, and chasuble that Armando would receive at his Ordination were blessed.

Learn more about the Congregation in Mexico 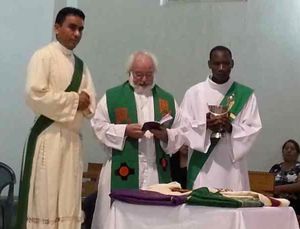 Afterward, over 70 people gathered at the House of Formation for dinner. The invited guests included members of Armando's family as well as Holy Cross priests, brothers, and sisters from the United States, Haiti, Peru, Chile, and of course Mexico who had journeyed to the Ordination. Among them was Fr. Thomas J. O'Hara, C.S.C., the Superior of the United States Province, which oversees the Congregation's mission in Mexico.

The day of the Ordination Mass, Friday, June 27, carried extra significance as it was also the Feast of the Most Sacred Heart of Jesus. Blessed Basile Moreau, the founder of the Congregation of Holy Cross, consecrated the Congregation's seminarians and priests to the Sacred Heart. Archbishop Cabrera, who also ordained Armando a deacon on October 11, 2013, spoke often of Blessed Moreau in his homily at the Mass.

In addition to the members of Armando's family, his confreres in Holy Cross, and members of the parish community, the Ordination Mass was also attended by five of the six new postulants who will join the Congregation's formation program in Guadalupe this fall. There were also a dozen young men from a discernment group from San Jose in Tamazunchale, Taman, which is the Congregation's other sponsored parish in Mexico. 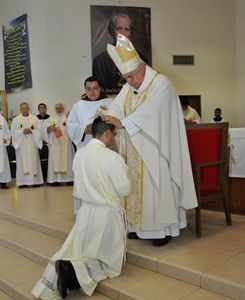 "The ordination of Father Jorge Armando Morales Trejo was an opportunity for all the Holy Cross present -- and there were many from all over Latin America -- to appreciate the unique Catholic culture of Mexico, woven into the Rite of Ordination," said Fr. James McDonald, Assistant Provincial and Steward of the United States Province. "It was from beginning to end also a Holy Cross moment, with images of our blessed founder and Saint Andre sheltering the rites."

Later that same afternoon, also at La Luz Parish, Armando celebrated his First Mass, known in Spanish as a "Canta Misa". Fr. Matt Kuczora, C.S.C., the Director of the Office of Vocations and the Postulant Formation Program in Mexico, preached.

As a newly ordained priest, Armando will continue pastoral work at La Luz Parish, where he also worked as a deacon this past year while completing his theological studies. He also will take over the Congregation's vocation efforts in Mexico from Fr. Kuczora, who is going to pursue higher studies.