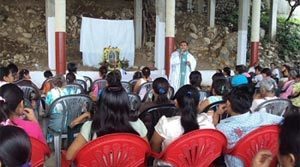 In 1987, the Congregation of Holy Cross sent missionaries to take pastoral responsibility for Santo Tomás Moro, a large urban parish in the Archdiocese of Monterrey. The Congregation had been ministering to Spanish-speaking Catholics in the United States, primarily in Texas, for over a century. The new parish commitment was initially envisioned as a way to enhance the Congregation’s work with the wave of immigrants coming north, primarily from Mexico.

Under the Congregation’s leadership, Santo Tomás Moro flourished, and in 1996 it was divided into two by the Archdiocese. Holy Cross assumed leadership of the new parish, Nuestra Madre Santísima de La Luz, which was the poorer of the two.

See a Photo Gallery of Parishes Around the World

Our work remains the same: walking with the people in their struggles in such a way that together we learn that difficulties are not a reason to stop carrying the cross. On the contrary, they are a reason to find in the cross our only hope. – Rev. Carlos Jacobo, C.S.C.   Read more ... 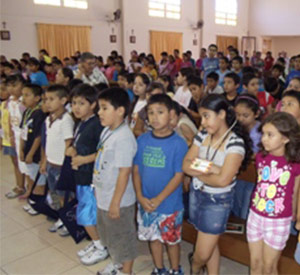 Today, La Luz Parish, which is located in the city of Guadalupe, remains the center of the growing work of Holy Cross in Mexico. The parish consists of four chapels that, together with the main church, serve over 30,000 Catholics. Sacramental preparation and the celebration of the sacraments are a large part of the parish's life.

La Luz also offers a wide array of pastoral outreach and social services, including a catechesis program for those with mental and physical disabilities, a network of support and counseling for victims of drug-related violence, and a soup kitchen for the elderly.

The work of the Congregation of Holy Cross in Mexico is overseen by the United States Province.

For a listing of the Congregation's schools, parishes, and other apostolic works in Mexico, check out the ministries page.