I remember walking through my impoverished neighborhood as a child. It was that poverty that spurred all of us who lived there to fight to get ahead in life or at least to improve, just a little bit, our personal situation or that of our family or community. 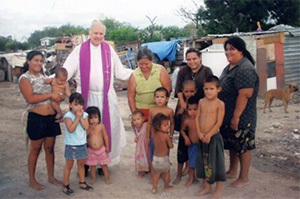 Our hopes were strengthened by a group of men who left behind a better and more comfortable life and decided to walk with us in our hopes and our poverty. They were the men of Holy Cross, men inspired by their love for God and His Kingdom.

By making our well-being their well-being, they helped us see that we were not alone, but that God was walking with us. Many were the difficulties they had to face – including language, culture, and even rejection – but through their example they spoke to us of the Cross that gives life.

The neighborhood where I grew up is a part of Nuestra Madre Santísima de La Luz Parish, which was formed from Santo Tomás Moro Parish in 1996. After the division, Holy Cross chose to continue its pastoral work at La Luz, the poorer of the two parishes, and to continue to accompany the people in their needs. 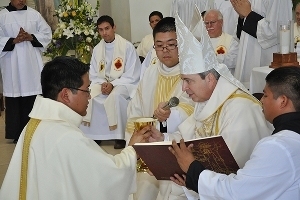 This work of hope not only continues today, but has grown with the addition of new ministries, made possible by the growth in vocations from Mexico. Those new ministries include an outreach program to persons with disabilities and initiatives to help families cope with the violence in our country.

Within the past two years we have also taken on a second parish in the state of San Luis Potosi to minister to the indigenous peoples in that region.

And yet, the work remains the same: walking with the people in their struggles in such a way that together we learn that difficulties are not a reason to stop carrying the Cross. On the contrary, they are a reason to find in the cross our only hope.

Fr. Carlos Jacobo de los Santos, C.S.C., is a member of the United States Province. He was the first parishioner from La Luz Parish ordained a priest in the Congregation of Holy Cross. Read about his Ordination.