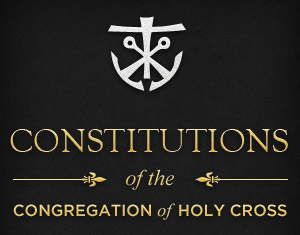 Tomorrow, on the feast of its patroness, Our Lady of Sorrows, the Congregation of Holy Cross will mark the 25th anniversary of the promulgation of its current Constitutions and statutes. For a religious congregation, the constitutions serve as the guiding document that shapes and defines its life and mission within the Church.

The current Constitutions were drafted and approved by the Congregation's General Chapter in 1986, which was held at the University of Notre Dame, in Notre Dame, Indiana. They were then submitted to the Holy See for approval, which came two years later on September 15, 1988. At that time, the Constitutions, as amended through the process, took effect.

Read the current Constitutions of the Congregation of Holy Cross

In the official decree from the Congregation for Religious and for Secular Institutes, Jerome Cardinal Hamer wrote, "May the generous living of these constitutions encourage all members of the Congregation to an ever deeper commitment to their consecrated life in accordance with the spirit of their founder, Father Basil Anthony Moreau, and under the strong and tender protection of their patroness, Our Lady of Sorrows."

Learn more about the history of Holy Cross

The current Constitutions, known for their poetic character, end with a constitution on "The Cross, Our Only Hope". The final lines exhort Holy Cross religious to continue not only in the footsteps of those men who have gone before them in the Congregation, but also in the footsteps of Jesus.

"The footsteps of those men who called us to walk in their company left deep prints, as of men carrying heavy burdens. But they did not trudge; they strode. For they had the hope. It is the Lord Jesus calling us. 'Come. Follow me'" (8:122-3).