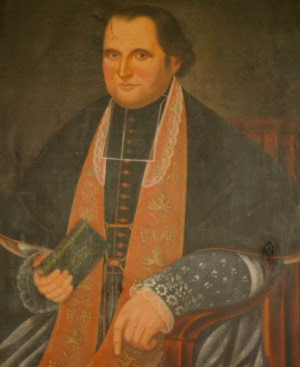 In 1820, Rev. Jacques Dujarié (1767-1838) began assembling a group of young men to instruct the youth in the countryside of Northwestern France. At the time, French society, including the Church, was still wrestling with the upheaval caused by the French Revolution (1789-1799).

During the Revolution, Church property had been seized, priests had been arrested and executed, and religious communities had been expelled. The departure of many religious also meant the closure of many schools. As a result, almost a whole generation in France had grown up with little to no formal education in general, let alone in matters of faith.

Fr. Dujarié, who had been ordained in secret during the Revolution, provided the young men with rudimentary training and then sent them out to rural parishes to teach. These young men became the Brothers of St. Joseph.

As he grew in age and his health declined, Fr. Dujarié turned over the leadership of the brothers on August 31, 1835, to a young and energetic priest named Basile Moreau.

Explore a Photo Gallery of the Origins of Holy Cross

By this time, Blessed Basile Moreau (1799-1873), who had been ordained in 1821, had already organized a group of Auxiliary Priests from among his brother priests in the Diocese of Le Mans. These Auxiliary Priests were to assist the diocese by preaching parish missions and by instructing the youth, particularly in preparatory seminaries and colleges. 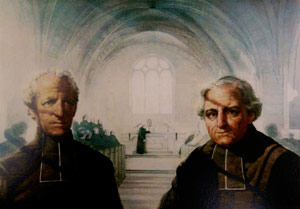 For the sake of their common mission as educators in the faith, Moreau joined the Brothers of St. Joseph and Auxiliary Priests on March 1, 1837, in the Fundamental Act of Union. The newly established Association of Holy Cross took its name from the Sainte-Croix neighborhood in Le Mans in which it was formed.

Moreau’s vision for Holy Cross was not complete until 1841 when he founded a group of sisters to work with the brothers and the priests. Moreau envisioned the sisters, brothers, and priests of Holy Cross compromising one holy family in imitation of the Holy Family.

Although ordained a diocesan priest, Moreau wanted Holy Cross to be a religious community, conformed to Jesus Christ and bounded to one another by the religious vows of poverty, chastity, and obedience. The first brothers professed their religious vows in 1836. Moreau himself, along with four other priests, made his religious profession on August 15, 1840. The first sisters professed vows four years later in 1844. 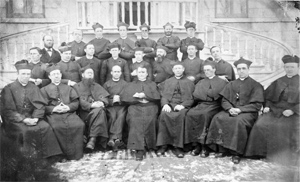 Moreau believed that the work that God had entrusted to Holy Cross extended beyond the borders of France to the rest of the world. Within a few short years of founding Holy Cross, Moreau sent his priests, brothers, and sisters from France to Algeria (1840), the United States (1841), Canada (1847), Italy (1850), and East Bengal, or present-day India and Bangladesh (1852).

On May 13, 1857, Pope Pius IX approved the first Constitutions of the Congregation of Holy Cross. This approbation made Holy Cross an official religious congregation under the direct authority of the Holy See. As part of its approval, however, the Vatican required that the sisters be in a separate congregation with a separate governance structure from the priests and the brothers. That same year, on June 17, the Congregation’s Conventual Church of Notre-Dame de Sainte-Croix was consecrated in Le Mans.

In 1903, all religious orders in France were suppressed, and North America became the focus of Holy Cross’s subsequent expansion. Numerous educational institutions, parishes, and other ministries were founded in the United States and Canada during these decades. 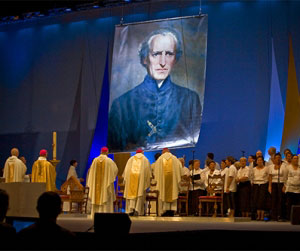 See a detailed timeline of events in the Congregation's history