In 1944, the Congregation of Holy Cross sent religious from French Canada to Haiti to begin a new mission. The first missionaries arrived September 8 and went to Cap-Haïtien to take over responsibility for the College Notre-Dame du Perpétuel Secours.

After focusing its initial efforts on the college and youth ministry, the Congregation accepted the local bishop’s offer to support two parishes, St. Rose of Lima in Pilate (1949) and St. Charles Borromeo in Borgne (1952). 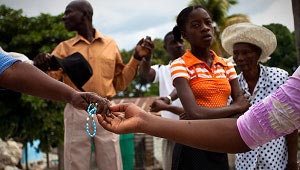 Under the repressive governments of the Duvaliers, the Congregation remained in solidarity with the people of Haiti. Holy Cross sought to transform its parishes into greater centers of both evangelization, by forming base ecclesial communities, and development, by training the people to be their own agents of change.

The Congregation’s schools continued to improve the quality of education while providing access to poor and under-privileged.

This witness attracted vocations to the Congregation and fed the growth in Holy Cross in Haiti over the next three decades. This growth continues in the present day. 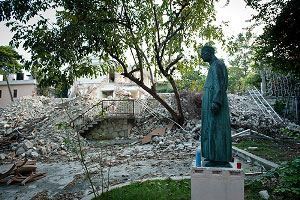 Like the rest of Haiti, the Congregation suffered tremendous loss in the 2010 earthquake. Thankfully, only one seminarian lost his life, but one school, Ensemble Scolaire Père Basile Moreau, was completed destroyed. Several other of the Congregation's schools were damaged, as were the Congregation’s seminary and administrative offices in Port-au-Prince, which was at the epicenter of the earthquake.

Through the generosity of other sectors and apostolates of the Congregation and the zealous work of our men in Haiti, Holy Cross has been able to build hope for the future.

Explore a Photo Gallery of the Missionary Outreach Around the World

After the devastating earthquake, Holy Cross has taken the lead in a vast movement to improve the network of Catholic schools. Although in different times and in response to different needs, like the religious in whose courageous footsteps we follow, we are refashioning our mission so as to preserve in our people real hope for change. – Rev. Michel Eugène, C.S.C.   Read more ...

Building on its reputation in Haiti as a leader in providing high-quality Catholic education, the Congregation recently opened the Institut Supérieure Marcel Bédard, which is a teacher’s training institute in Cap-Haïtien run in partnership with the University of Notre Dame’s Alliance for Catholic Education. 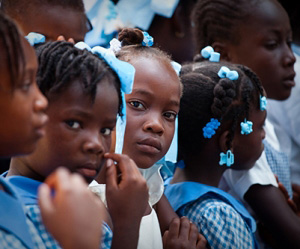 Today, the work of the Congregation in Haiti spans eight of the country’s 10 dioceses, and two Holy Cross priests now serve in the hierarchy as bishops. The Congregation administers 14 primary and secondary schools. Altogether, Holy Cross educates over 5,000 Haitian children each year. The Congregation also serves in eight parishes, and its outreach to the people, who are counted among the poorest in the Western Hemisphere, includes pioneering work in the area public health.

The work of the Congregation of Holy Cross in Haiti is conducted by the Province of Our Lady of Perpetual Help (Port-au-Prince, Haiti).

For a listing of the Congregation's schools, parishes, and other apostolic works in Haiti, check out the ministries page.