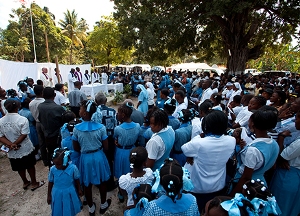 In 1969, the men of Holy Cross in Haiti met for a Chapter, celebrating the 25th anniversary of the arrival of the Congregation to the country. Although I was not a member of the community at the time, that Chapter would come to have a tremendous impact on my life as the religious refashioned the contours of their mission in Haiti. They courageously decided, in a country tightly controlled by Duvalier and with a frightened Church, to accompany the people in their quest for justice, for liberty, and for a better life through a bold and forward-looking ministry.

Holy Cross initiated a ministry of presence and a reorganization of the parish church through foundational ecclesial communities, notably in Pilate. Holy Cross also took the initiative to train local leaders in order to form them as agents of development. Several projects likewise emerged in our parishes: cooperatives, literacy programs, community stores, and agriculture. Holy Cross led by example and began to attract young people. I am a member of one of the first cohorts of young men who desired to invest their generosity and their youth to build hope for the Haitian people through the work of Holy Cross.

At the same time, Holy Cross continued its commitment to formal education through a growing number of schools, with a concern for excellence and with the goal of providing its students with the best possible tools with which to engage a world becoming more competitive and demanding. 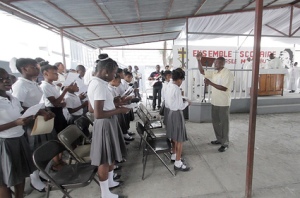 With this forward-looking mission, after the devastating earthquake of January 2010, Holy Cross has been able to take the lead in a vast movement to improve the network of Catholic schools. Thus, although in different times and in response to different needs, like the religious in whose courageous footsteps we follow, we are refashioning our mission so as to preserve in our people real hope for change, trusting that it will have effects on people’s lives well into the future.

Fr. Michel Eugène, C.S.C., is the Superior of the Province of Our Lady of Perpetual Help (Port-au-Prince, Haiti).