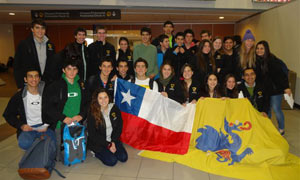 Over 40 students from the Congregation's two schools in Chile (St. George's College and Colegio Nuestra Señora de Andacollo) have already arrived in Brazil. They are joined by 12 seminarians, brothers, and priests from the Congregation's International House of Studies in Santiago, Chile. They are engaging in a week of mission and pastoral service at Colegio Notre Dame in Campinas, São Paulo, before heading to Rio. During that time, they will be living with students and families from the school.

The Congregation also has groups going to WYD from ministries in Peru (Our Lord of Hope Parish), France, and the United States (University of Portland). 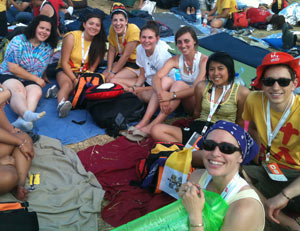 "World Youth Day is a wonderful opportunity for our students to strengthen their faith by connecting with over a million young Catholics from around the world," said Rev. Gerard Olinger, C.S.C, the Vice President for Student Affairs at the University of Portland. "I think the most remarkable thing about World Youth Day is what I saw it do to our students when they got back to campus from Spain in 2011. They were alive with their faith and the desire to share it with others. I watched them get more involved in the liturgical life on campus as well as with campus ministry programming. I think that is the genius of World Youth Day."

In addition to hosting the pilgrims from the rest of the world, the Congregation's three schools in Brazil as well as its parishes are sending groups of youth to participate in World Youth Day. Holy Cross is also participating in the vocations pavilion in Rio. 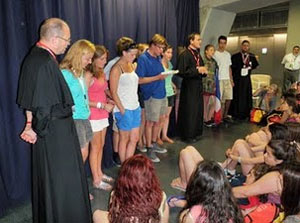 "World Youth Day is an opportunity to strengthen the unity and faith of young people in Jesus Christ," said Br. Edson Pereira, C.S.C., who works in formation with the postulants in the District of Brazil. "For the Congregation in Brazil, it is a great opportunity to get closer still to the young. World Youth Day relates well to the charism of Holy Cross as the week is precisely about offering young people the opporunity to meet and deepen their relationship with Jesus Christ. In the society in which we live today, we have to offer the young Christian values that will help them live." 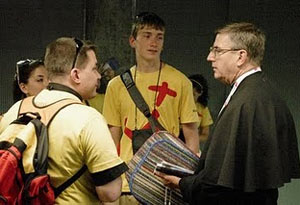 As was the case at World Youth Day 2011 in Madrid, Spain, Holy Cross Family Ministries is sponsoring a Marian chapel for pilgrims. The chapel features the Luminous Mysteries dramatically portrayed on four screens surrounding the young pilgrims with a very unique and spiritual way to pray the Rosary. It is part of a wider site sponsored by the United States Conference of Catholic Bishops.