Construction on Notre Dame College Mymensingh in Bangladesh is proceeding on pace for the planned opening of classes in July 2014. The cornerstone for the Congregation of Holy Cross’s second college in Bangladesh, which will also be the first Catholic college in the Diocese of Mymensingh, was laid back on March 1, 2013. 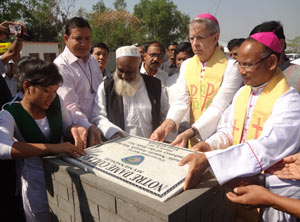 “After many years of planning, which included some hurdles to overcome, the dream of the Diocese of Mymensingh to have an outstanding college, open to all children, is taking an important step towards its fulfillment,” said the Most Rev. Joseph Marino, who was the Apostolic Nuncio to Bangladesh at the time of the laying of the cornerstone.

He thanked the Congregation for responding “with its well-known missionary zeal to commit to operating this school in line with its long history in the field of education. Certainly, a spirit of thanksgiving fills our hearts as we witness this milestone in the journey of this initiative.”

Although the Diocese of Mymensingh was only founded in 1987, the presence of the Catholic Church among the tribal peoples of the region, who are known as both “Garo” and “Mandi,” dates back over 100 years. In 1910, Holy Cross religious, who began working in East Bengal since 1853, established the first Catholic mission among the Garo people. The subsequent evangelization of Garos ranks as one of the great fruits of the Congregation’s missionary work in East Bengal, which included parts of present-day India and Bangladesh.

Today there are almost 80,000 Garo Catholics. The initial mission has grown into 13, four of which are still administered by the Congregation. This growth has made the Diocese of Mymensingh the largest in the country of Bangladesh in terms of Catholic population.

As a sign of its own commitment to Notre Dame College Mymensingh, the Congregation purchased the first four acres on which the new college is being built. Also, in addition to naming Fr. Rozario the first principal, Holy Cross has committed through the Sacred Heart Province to providing other religious to help staff the school.

“We express our gratitude to the men of the Holy Cross Congregation, who have accepted the challenge of building up this new college here,” said Most Rev. Ponen Paul Kubi, the Bishop of Mymensingh. “We are confident that with the wealth of experience they bring from the Dhaka institution, they will be able to establish a similarly high standard educational facility here in Mymensingh.”

“The college will begin a new way of evangelization, based on values and ideals, by providing quality education to form new leaders for the Church and society, and promoting the creation of a society of peace and harmony,” said Rev. James Cruze, C.S.C., the Superior of the Congregation’s Sacred Heart Province. “The vision is clearly stated: ‘Notre Dame College Mymensingh is to create a positive learning environment that is conducive to educate the mind and heart of students.’”

The plans for Notre Dame College Mymensingh call for a five-story building. This first phase of construction will complete the first two floors as well as the residence building.