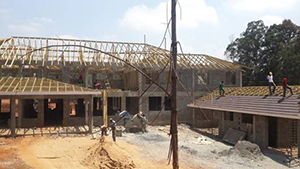 Construction of the new McCauley House of Formation in Nairobi, Kenya, is proceeding according to schedule and is roughly 35% complete. The steady progress on the construction means that the men in formation as well as their staff look forward to moving from their rented quarters to the new house on July 1, 2016.

The construction of the new house was first precipitated by the Kenyan government's condemnation of the neighborhood in which the previous formation house was located in order to make way for the new Southern Bypass highway. Without warning, officials from the Ministry of Roads arrived one morning and began marking the formation buildings with big yellow X´s for their demolition. Fr. Patrick Neary, C.S.C., the Rector of the House of Formation at the time and now the Superior of the District of East Africa, was told that the formation community only had a matter of days to leave the property. 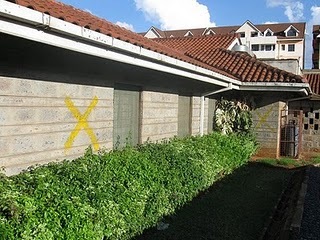 As Fr. Neary explains, what was a huge loss and a great cross for the Congregation in East Africa at the time, by the Providence of God, has turned into a great grace and unforeseen blessing. The formation community was quickly able to find temporary quarters with the Consolata priests and brothers. Then, plans began for a new house of formation that could accommodate the growth in vocations in East Africa in ways the previous house could not.

"The new formation house will contain 50 rooms, reflective of the fact that our formation houses are full and that aspirants to Holy Cross in East Africa are increasing with each passing year," said Fr. Neary.

According to Fr. Cyrpian Binaka, C.S.C., the Rector of the House of Formation, the timing and the additional space could not be better.

"This year, four rooms are being shared by our first year temporarily professed members. To the extent that they have accepted to share the limited space, one recognizes the inconvenience that they are experiencing: They cannot rest, reflect, pray, or read comfortably in their rooms. Thus, the new formation house will exude a lot of hope and confidence that they have a home," said Fr. Binaka.

Although the new formation house will also have space to extend hospitality to members of Holy Cross, as well as the Congregation's collaborators in the mission, Fr. Binaka emphasizes the space for the initial formation of men preparing to serve as religious brothers and religious priests in Holy Cross. The new McCauley House of Formation will have facilities for hosting workshops, seminars, and days of recollection. The additional bedrooms also create the possibility of hosting men in formation for the Congregation from around the world.

"I would like to underscore the space for formation of our young temporarily professed members in the District. This is their last home in formation after which they are sent into ministry. It is important that it be a place conducive for their growth and maturity. This is important for the future of the mission in the District and the Congregation as a whole." 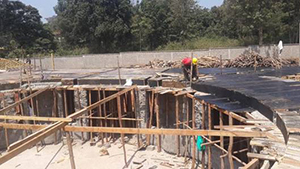 The chapel in the new house of formation will be dedicated to the Sacred Heart and will feature stained glass windows with the images of Blessed Basil Moreau and St. André Bessette, as well as the Uganda Martyrs and St. Josephine Bakhita. Two of the chapel niches will contain two professionally written icons of Our Lady of Sorrows and of St. Joseph.

The house itself, however, will be named for the Servant of God Vincent McCauley. A Holy Cross priest who was later ordained a bishop, McCauley was an intrepid, compassionate missionary both to Bangladesh and Uganda. In Uganda, he became the first bishop of the Diocese of Fort Portal, and he had a tremendous influence on developing the Church in Africa. His leadership in the establishment of both an East African seminary and the Catholic University of Eastern Africa remains one of his distinctly Holy Cross legacies to a region in which global Catholicism finds one of its modern centers of gravity. 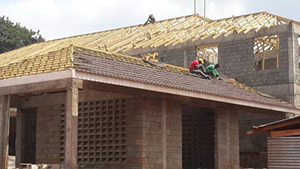 While the formation community hopes to move into its new home on July 1, the dedication of the McCauley House of Formation is scheduled for October 22, 2016, exactly 6 years from the month when the old formation house was condemned. It will serve as the hub of formation for the Congregation's District of East Africa, which serves Uganda, Kenya, and Tanzania.

"We are grateful that the construction is going on, said Fr. Binaka. "It is giving us a lot of hope for better times in the future. Yes, the new house will be a place of hope, an assurance that there are young men who are being prepared to join in the mission that the Lord entrusts to our Congregation."