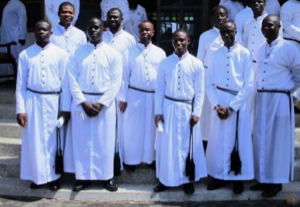 The District of West Africa joyfully celebrated the First Profession of Vows of their four brother novices on November 9, 2019, at the St. Brother Andre Chapel at the Holy Cross District Centre in Brafoyaw, Cape Coast, in Ghana.

The presider at the Mass of First profession was Fr. Raymond Tangonyire, S.J. The Holy Cross Novitiate community has a special relationship with the Jesuits as they are located in the same neighborhood and gathered together for liturgies. In addition, the Jesuits have served as spiritual directors for the novices and assisted with several of their formation sessions. 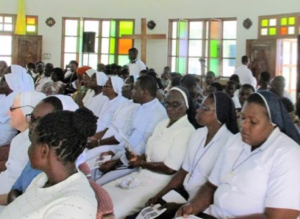 Also joining in the celebration were the Sisters of the Holy Cross, other religious and clergy, families of the newly professed, and many friends and well-wishers of the District.

Br. John Affum, C.S.C., Superior of the District of West Africa, received the vows of the four novices after they had been called by name and presented by Br. Francisco Gillette, C.S.C., who was their Novice Master. Joining Br. Gillette on the staff of the Novitiate for the canonical year were Br. Joseph Annan, C.S.C., and Br. William Tawiah, C.S.C. 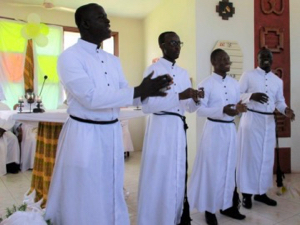 After the Mass of First Profession, the community and guests enjoyed a feast in celebration of the newly professed brothers.

Following their First Profession, the newly professed brothers have all been assigned to Br. Rex Hennel Scholasticate Community, which is located in Sunyani, to continue their initial formation in the Congregation.