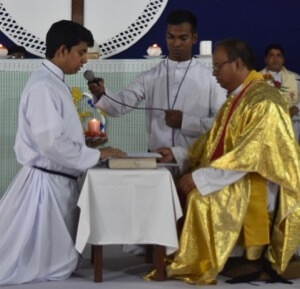 The weekend of May 10-11, 2019, was a festive and joyful one for the Congregation of Holy Cross's Sacred Heart of Jesus Province in Bangladesh. In addition to the Final Profession and Deaconate Ordination of Mr. Count Roosevelt Rozario, C.S.C., the Province also had a series of silver jubilees of community members to celebrate.

The Mass of Final Profession was held on May 10 at Moreau House in Rampura, Dhaka. The Most Rev. Lawrence Subrato Hawlader, C.S.C., Bishop of the Diocese of Barisal, presided at the Mass, and Fr. James Cruze, C.S.C., Superior of the Sacred Heart of Jesus Province, received the Final Profession of Mr. Rozario. 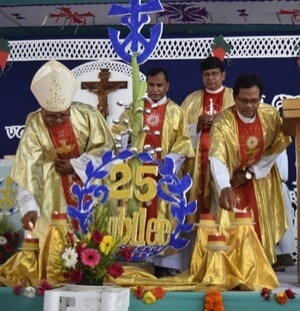 Following the Mass, there was a cultural program and delicious meal served to the Holy Cross religious and many guests who were present for the festivities. It was a poignant moment of celebration for all present, as they were able to witness both the enthusiasm of the newly finally professed as well as the testament of fidelity of those who already have advanced far on the journey.

The following day, Bishop Subrato ordained Mr. Rozario to the diaconate. Once again, the Mass was held at the Congregation's Moreau House in Rampura, Dhaka

Now Deacon Rozario hails from the village of Bagdi in the Nagari Parish of the Archdiocese of Dhaka. After the completion of his high school studies, he joined the Christo Darshon Seminary in 2007 and was received into the Holy Cross Novitiate in 2011. He professed his First Vows on July 27, 2012.

Following his Final Vows and Ordination, Deacon Rozario has been appointed to the Mothbari Parish in the Archdiocese of Dhaka.