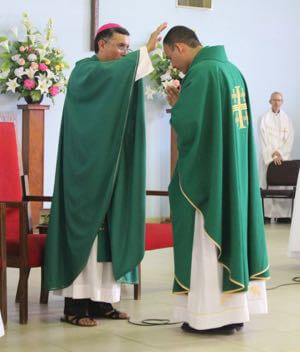 It was a significant moment not just for Fr. Ledezma and the parish, but also for the wider mission of Holy Cross in Mexico. Fr. Ledezma is the first pastor of La Luz Parish, which serves as the hub of the Holy Cross mission in Mexico, to be born in Mexico and formed by the Congregation in Mexico.

He also is only the second Mexican-born pastor for the Congregation in Mexico. The first was Fr. Marin Hernandez, C.S.C., who was named the pastor of San José Parish in San Luis Potosi in 2010.

“Fr. Alfredo’s appointment as pastor is a hopeful sign that Holy Cross has taken root in Mexico,” said Fr. Pete Logsdon, C.S.C., who was the first pastor of La Luz Parish in 1996. Fr. Logsdon was also the Superior of the then Southern Province in 1987 when Holy Cross assumed pastoral responsibility for Santo Tomás Moro Parish in Guadalupe, Nuevo León, from which La Luz Parish was born.

Fr. Rick Wilkinson, C.S.C., the Vicar and First Assistant of the United States Province, which oversees the Congregation’s mission in Mexico, concurred with Fr. Logsdon’s assessment: “La Luz was established by Holy Cross, when Fr. Jack Keefe opted for the poorest of the poor from Tomas Moro. With the hard work of Holy Cross, with it many lay collaborators, La Luz is now known not for its poverty as much as its witness to a rich faith and unbounded hope. To entrust La Luz to Alfredo as pastor is a sign of confidence of the deep roots Holy Cross has in Mexico.”

See a photo gallery of Holy Cross parishes in the world

As part of the rite, the official decree naming Fr. Ledezma pastor of the parish was read. He also received a chasuble from the President of the Parish Council as a symbol of the Christian community who receives him. Then, as is the custom for pastors and superiors in the Church, Fr. Ledezma made a Profession of Faith and an Oath of Fidelity. He also renewed the promises of his priestly ministry. 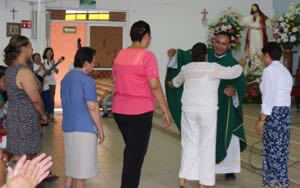 Later in the Mass, Bishop Talamantes presented Fr. Ledezma in a special way to the sick of the parish, who he will tend in a particular way in his ministry as Pastor. The bishop also led the new pastor in a moving tour—or pilgrimage—around the parish church to the places that will have a key role in his new ministry, including the Baptismal Fount, the Confessional, the Altar, and the Presider’s Chair. The tour underscored for Fr. Ledezma what should be his priorities as Pastor of La Luz.

The significance of the Mass and the moment was not lost on Fr. Ledezma.

“Before all else, I have a feeling of thankfulness to God for all the blessings he has given me in life,” said Fr. Ledezma. “To be named pastor of Nuestra Madre Santísima de la Luz Parish is a great privilege. Until this moment, the parish has been in the hands of two great pastors, Fr. Pete and Fr. John. I am very grateful to them for all that they did and also for all that they have taught me through their service and witness, having working with both as an Associate Pastor.

“Now, it is certain, it is my turn as the first member of the Congregation born in Mexico to continue this mission, and I feel very happy because the parish already has the identity of the Holy Cross spirituality. Now I will work with the brothers and sisters to continue with this mission that the Lord has entrusted to me,” he said.

Following the Mass, there was a festive celebration in the Parish Hall that drew many members of the parish. Fr. Ledezma’s family was also present, as were many Holy Cross religious, including many Holy Cross Sisters who serve in Monterrey as well. 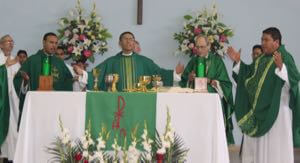 One of the many priests to concelebrate was Fr. Daniel Panchot, C.S.C., the Pastor of San Roque Parish in Santiago, Chile, who was the Vocation Director who worked with Fr. Ledezma when he joined Holy Cross.

La Luz Parish was established in 1996 when the Archdiocese of Monterrry divided the large, urban Santo Tomás Moro Parish in two. Holy Cross had been administering Santo Tomás Moro since 1987, yet the Congregation decided to assume leadership of the new parish because it was the poorer and least developed of the two.

Since its humble beginnings, La Luz has grown and thrived under the pastoral leadership of Holy Cross, including two dynamic pastors, Fr. Logdson and most recently Fr. John Herman, C.S.C., who is the new Rector of Moreau Seminary in Notre Dame, Indiana, in the United States. Now, Fr. Ledezma will carry on that great tradition.

“I have to say that I don't think that his being a Mexican is the most important factor in why I am so happy with the choice of Fr. Alfredo,” said Fr. Logsdon. “What is most important for me is that the Pastor of La Luz be a good pastor—a people person who is authentic, a listener, an organizer, a leader, a decision-maker etc. I think that Alfredo has all those qualities. 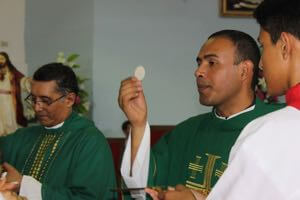 “During those years of theology, Alfredo demonstrated good pastoral instincts with the people of La Luz Parish, where he served,” continued Fr. Logsdon. “Whether he was giving classes or organizing programs for the poor, Alfredo ministered to everybody in the parish. After Ordination, Fr. Alfredo served as Associate Pastor at La Luz Parish and without a doubt, he was not only respected as a wonderful priest but he was much loved by the parishioners.”

Fr. Ledezma finds himself, as well, ready and excited for the challenge and the opportunity.

“My dream for the parish is that we continue with what we have been able to do up until today—to give an identity of hospitality and welcome, especially to those who find themselves most distant, that all of the members of the parish community feel that here is their home, that it is a providential place to encounter God,” said Fr. Ledezma. “The work of the parish from its beginnings has not been of one person, but of a community that has been involved, as much the priests as the sisters of Holy Cross. This has had a very positive effect, because we can give witness to the sign of communion that exists in Holy Cross. God willing, in the future, we will be able to continue on this same path.”