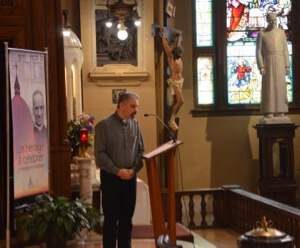 Over 40 Holy Cross religious were present at the Oratory of St. Joseph in Montreal, Canada, the morning of August 10, 2017, to celebrate the First Profession of Tanneguy De Saint-Martin, C.S.C. Fr. Mario Lachapelle, C.S.C., Superior of the Province of Canada, presided at the beautiful liturgy, and a small reception and celebration followed.

Originally from France, De Saint-Martin is already an ordained priest. He came to know the Congregation of Holy Cross working summers the past 10 years at the Oratory of St. Joseph.

Take a photo tour of Oratory of St. Joseph

Fr. De Saint-Martin’s close work and collaboration with Holy Cross at the Oratory inspired him to join the Congregation, and he entered the Novitiate in Canada in 2016. His First Profession is the culmination of his Novitiate year of formation. 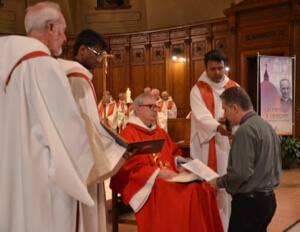 Fr. Lachapelle contined: “In my opinion, this is the meaning of our commitment to the Holy Cross and our fidelity to God. In 1986, the Superior General of the time, Fr. Claude Grou, C.S.C., whom you know well, already emphasized: ‘The foundation of fidelity in religious life is attachment to Christ. This implies a relationship with Jesus. Without this personal relationship, where fidelity is rooted, the covenant becomes merely the observance of a law that has died.’

“My biggest wish, Tanneguy,” concluded Fr. Lachapelle, “is that you never forget it.”

Following his First Profession, Fr. De Saint-Martin will minster at the Oratory of St. Joseph. He is especially interested in the counseling dimension of the oratory’s ministry, having received a Master’s Degree from St. Paul’s University in that field. 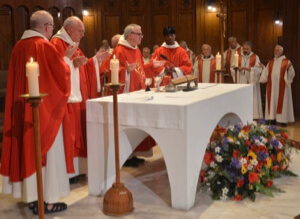 This new novice and Fr. De Saint-Martin’s First Profession are great signs of hope for the Congregation in a land where it has long and faithfully served. Canada was one of the first countries to which Blessed Basile Moreau sent missionaries. The first group of Holy Cross priests, brothers, and sisters arrived in 1847. The Holy Cross community in Canada also gave birth to the Congregation's first canonized saint, St. André Besette, who was canonized on October 17, 2010, by Pope Benedict XVI.