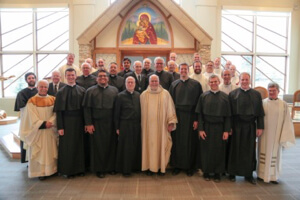 “Today, my dear brothers, isn’t about ending your year at the Novitiate, but rather the beginning of a new life as a consecrated religious in the Congregation of Holy Cross,” preached Fr. Ken Molinaro, C.S.C., the Novice Master in his homily. “What you seek is nothing less than God himself, opening yourself to God’s personal love for you!”

Read news of other First Professions in Holy Cross

In preparing for their First Professions, the novices received a retreat from Br. Paul Bednarczyk, C.S.C., the Vicar General and First General Assistant of the Congregation. 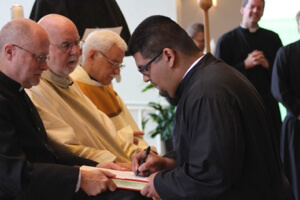 Br. Bednarczyk’s conferences to the novices included: God’s Call – Our Response; The Committed Life in Holy Cross; Passion and Zeal; the Cross, Our Hope; and Responsibility in the Religious Life. He then concluded the retreat by sharing with the men some of this own “thoughts and advice” regarding the vowed life in the Congregation.

Per the local custom of the Holy Cross Novitiate in Cascade, Colorado, the First Profession weekend began with a Mass and barbeque on Friday for the Holy Cross religious who had gathered as well as the families and friends of the novices.

In a twist this year, the Mass of First Profession on Saturday was held at Our Lady of the Woods Parish in Woodland Park, Colorado. Normally, the novices profess there First Vows in Sacred Heart Parish in Colorado Springs, Colorado, which is a parish sponsored by Holy Cross. This year, however, Sacred Heart is undergoing a renovation, promoting the move of the liturgy to Our Lady of the Woods. 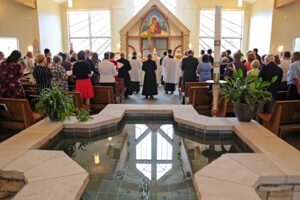 While not a Holy Cross-sponsored parish, Our Lady of the Woods has generously received and welcomed novices for their Sunday ministry placements for many years. Hosting the First Profession Mass there this year was a great way to thank the community for its support of so many classes of novices, and many members of the parish came to join in the celebration on Saturday. They joined the over 20 Holy Cross brothers and priests who were in attendance.

In his homily, Fr. Molinaro told the novices: “Like an athlete in training, you began to embrace the self-discipline, the asceticism necessary for growth in the interior life, as you matured in your understanding of self, of community, and most profoundly of the One who called you summoned you to take this step, who loves you more than you could ever imagine or repay, to whom you consecrate your life this day—all that you have and all that you are. ‘Take, Lord, receive, for all is yours!’”

“Always remember, the vows you profess invite you to ‘Single-hearted intimacy with God, to trusting dependence upon God, and to willing surrender to God,’” concluded Fr. Molinaro. “Love must be the foundation of the vows you profess this day, a love that finds expression through a life of fidelity in service to God’s people!”

Learn about Holy Cross in the United States 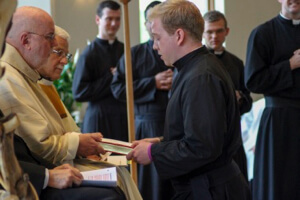 Then the men exchanged their novice habits for the Holy Cross habits, as well as received the Congregation’s cross and anchors to wear at other times as their sign of profession in Holy Cross. Assisting them in these rites were Fr. Donald Dilg, C.S.C., Assistant Novice Master, and Br. James Blaszak, C.S.C., the Novitiate Procurator.

Following the Mass, a reception was held at the parish hall to greet and congratulate the newly professed. About 150 community members, family members, and friends attended the celebration, which included homemade meatballs and Italian sausage by Br. Blaszak. 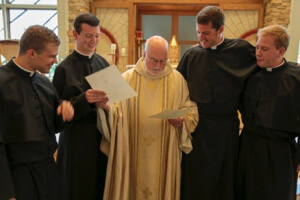 While the five newly professed already have left the Novitiate in Colorado to continue their initial formation in Holy Cross, a new group of eight novices will be arriving to Cascade, Colorado, next week. Seven of the new novices are from the United States Province, while the eighth novice is a member of the Canadian Province. They will arrive to Colorado on August 8 and then be officially received into the Novitiate on August 11.