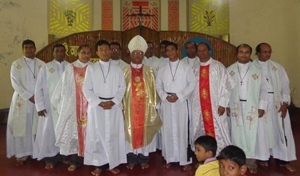 Earlier this month, on August 1, two novices in Bangladesh made their First Profession of Religious Vows in the Congregation of Holy Cross. The Mass of First Profession was held at the Holy Cross Novitiate in Sagardi, Barisal. The Most Rev. Subrato Howledar, C.S.C., the Auxiliary Bishop of the Diocese of Chittagong, presided at the Mass, and Fr. James Clement Cruze, C.S.C., Superior of the Sacred Heart of Jesus Province (Dhaka, Bangladesh), received the novices’ vows.

Learn about Holy Cross in Bangladeash

Two novices who professed vows are Shohag B. Gabil, C.S.C., and Mithu Palma, C.S.C. Both are members of the Sacred Heart Province and will continue their formation to be a religious priest in the Congregation.

Over 11 priests, four brothers, and 20 religious sisters joined the two novices and their families for this joyous celebration, which included a reception and lunch following the Mass.

Read of other First Professions in Holy Cross

While two newly professed leave the Novitiate in Bangladesh to continue their formation, just over a week before on July 25, a class of eight new novices was received into the Novitiate. They arrived to the Novitiate bright and early at 5:30 that morning, and later that same evening a reception ceremony was held for them. 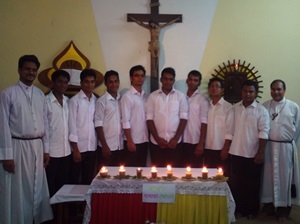 The reception ceremony started with tying a Rakhi Bondhoni (a piece of thread which one ties around wrist of another as a symbol of friendship and welcome) on each novice’s left hand by Fr. Eugene Justine Anjus, C.S.C., the Novice Master, and Br. Kajal Linus Consta, C.S.C., the Assistant Novice Master. Each new novice was given the Bible and the Constitutions of the Congregation of Holy Cross during the ceremony. The ceremony was followed by a dinner and a short cultural function.