On July 16, the Congregation of Holy Cross’s District of East Africa gathered at the community’s Novitiate in Lake Saaka, Uganda, to witness and celebrate the First Professions of nine novices. Their vows were received by Fr. Lawerence Mwenya, C.S.C., Vocation Director of the District, because the District Superior, Fr. Cyprian Binaka, C.S.C., was in Rome for the Congregation’s Extraordinary General Chapter. 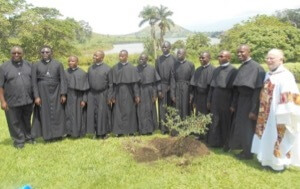 Of the nine newly professed religious, two are from Kenya, one from Tanzania, and the remaining six are from Uganda.

The novices’ preparation for their First Profession began back on July 21, 2018, when they were received into the Holy Cross Novitiate in Lake Saaka. During the year, they were accompanied and formed by the Novitiate Staff, consisting of Fr. Tom Smith, C.S.C., Novice Master, Br. Everest Neema, C.S.C., and Fr. Fulgens Katende, C.S.C.

Their more immediate preparation for their First Professions consisted in a retreat preached by Fr. Francis Mukasa, C.S.C., a former novitiate staff member and presently pastor of St. Denis Ssebugwawo Parish, the District’s new commitment in Kampala Archdiocese. He chose as the retreat’s theme “Here I am Lord, I come to do your will”. 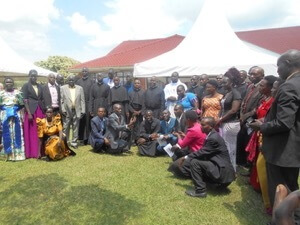 As with last year’s first profession which included 12 novices, the Mass of First Profession was held on tents on the Novitiate grounds as the chapel was too small to accommodate the crowds of family members, friends, colleagues, and religious who came for the celebration. All told, over 200 participated in the celebration, which included a festive thanksgiving dance led by the newly professed.

After the liturgy, the newly professed planted a shade tree in the novitiate compound and then a celebratory lunch was served for all. The lunch stretched into the evening when roasted goat, pork and chicken kept the party going till after dusk. 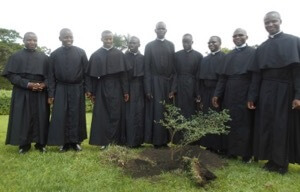 “The days prior to our profession were unseasonably rainy and predictions were not promising, but we were blessed with a beautiful day to celebrate the commitment of these nine new religious of our Holy Cross family,” said Fr. Smith. “As they planted the shade tree in our compound, I couldn’t help but feel happy that they themselves have now been ‘planted’ as my brothers in Holy Cross.  Like their tree, there is still much growth (and pruning) ahead, but, as Fr. Mwenya prayed in response to each of their vows, we trust that the God who began this good work will bring it to completion.”

With their vows professed and the celebrations completed, all the newly professed are now enjoying a brief holiday with family before reporting to McCauley Formation House in Nairobi on August 2 to continue their formation and to study at Tangaza University College.

Read about other First Professions in Holy Cross

Less than a week after the departure of the nine newly professed, 12 new novices arrived to the Novitiate. Of the new arrivals, one is for the Society of Brothers and the other 11 are for the Society of Priests. Like the previous class, the majority are from Uganda, but there are also two novices from Kenya and one from Tanzania. 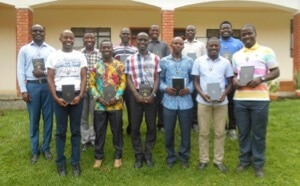 Fr. Smith presided and preached at the reception liturgy, assisted the other staff members, Br. Neema and Fr. Katende. The new novices then went on a three-day, silent, orientation retreat directed by Sr. Romina Nyemera, Superior General of the Our Lady of Good Counsel Sisters, Mbarara, Uganda.

The 12 new novices on the heels of First Profession classes of nine and 12 over the past two years highlight the continued growth of the Congregation in Uganda, Kenya, and Tanzania.