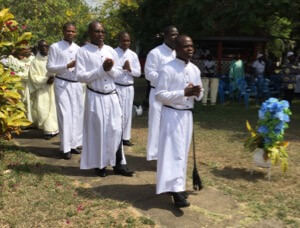 The Mass of Final Profession, which drew over 500 priests, religious, family members, and friends, was held at the St. Brother Andre Chapel at the District Center near Cape Coast, Ghana.

Br. Chester Freel, C.S.C., the Superior of the Midwest Province of Brothers (Notre Dame, Indiana), which oversees the Congregation’s mission in West Africa, received the vows of the five brothers. 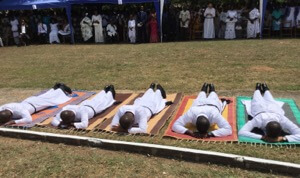 The main celebrant and homilist at the Mass was the Vicar General of the Archdiocese of Cape Coast, the Very Rev. Bonaventure Annan.

A grand banquet to celebrated the newly finally professed followed the Mass.

“Today was a great day for the Congregation of Holy Cross,” said Br. Freel. “Our five Brothers have added their names to a long and distinguished list of those who have committed themselves to follow in the footsteps of the founder of the Congregation, Blessed Basile Moreau. As perpetually professed members of Holy Cross, our five brothers are now called to live a life filled with zeal.

“Blessed Moreau tells us that ‘Zeal is the great desire to make God known, loved, and served, and thus to bring knowledge of salvation to others.’ It is to live with such zeal that our Brothers have committed themselves today,” he continued.

Explore a Photo Gallery from Final Vows from around the World

The five newly professed Holy Cross brothers are engaged in a variety of different ministries and studies. 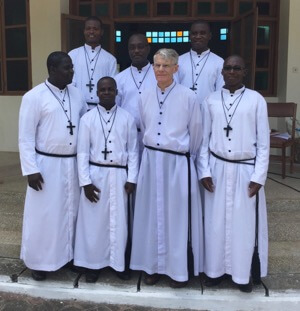 Br. Afeletey is studying full-time at the University of Education, Kamusi.

Br. Amoah is currently fulfilling his national service after having completed a degree in Religious Education and Studies.

Br. Agyemang, having completed a four-year degree program in Electrical and Electronic Technology in Education from the University of Education, Winneba, serves on the faculty of Holy Cross Technical Institute.

Br. Bogtir, having completed a Diploma in Education from the University of Education, Winneba, works as a teacher at Holy Cross Technical Institute in Takoradi.

Br. Tawiah serves in the business office, classroom, and guidance office at Holy Cross Technical Institute in Takoradi. He is also the Assistant Candidate Director.