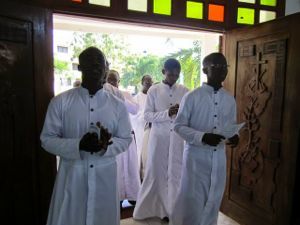 The four men, all religious brothers, spent the previous year at the St. André Bessette Novitiate in Brafoyaw, Ghana, under the direction of Novice Master, Br. Joseph Tsiquaye, C.S.C. They entered the Novitiate on July 7, 2013.

Fr. Robert Gilmour, C.S.C., presided and preached at the Mass, at which six Holy Cross brothers also renewed their temporary vows.  In his homily, Fr. Glimour spoke of the "beauty and mystery" of religious profession. 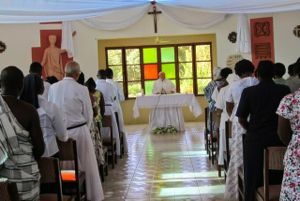 Speaking directly to the religious brothers making their First Profession, Fr. Gilmour said, "God designed religious life as an espousal love relationship between God and the soul, between God and our brothers. You are consecrated to the Crucified through your holy vows. Now it remains for you to correspond to conform your life with such a great grace."

Learn about the spirituality of Holy Cross 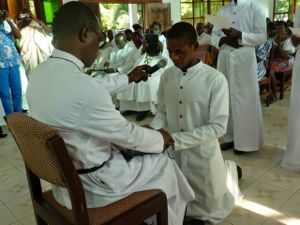 Having completed their Novitiate, the four newly professed Holy Cross brothers will now continue their initial formation in the Congregation.

"We are blessed to have this additional number in the District," said Br. Tsiquaye. "It enhances and affirms our determination to carry on the mission of the Congregation in West Africa. It will be a while before they are ready to take part in full time ministry, but we see a bright future for the Congregation."